You are at:Home»Current in Geist»Expanding for explorers: Lawrence Police Dept. grows its Explorer post with more scouts, bicycles 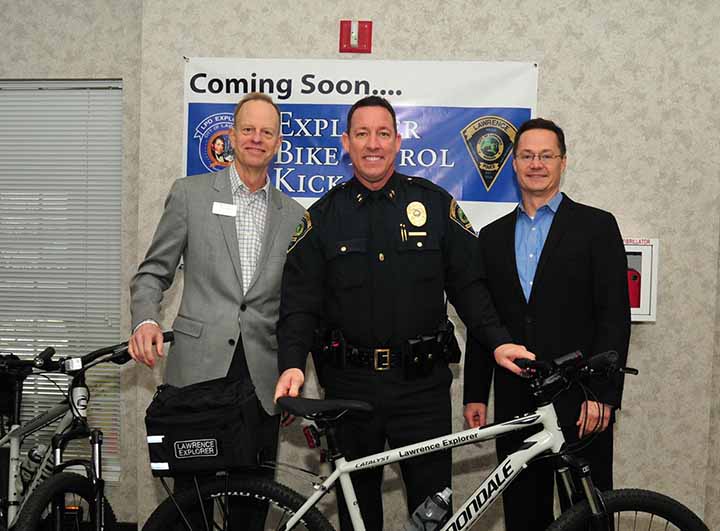 Last month, the Lawrence Police Dept. successfully expanded its Explorer Post, Post No. 160 – the oldest Explorer Post in the state – on two fronts, with both scouts and bicycles.

On Dec. 7, 22 Explorer Scouts were sworn in during a special ceremony at Lawrence City Hall, and just two weeks later, on Dec. 22, Lawrence Police Chief David Hofmann accepted the donation of four customized bicycles from Flanner and Buchanan Funeral Centers during a presentation at the Lawrence Government Center.

“It’s really a cool thing. We went from two explorers to 24,” Lawrence Mayor Steve Collier said. “All of this is done through donations. It really gives those kids a great opportunity. The leadership aspect is nothing new to them, but it’s certainly nice for the City of Lawrence. They actually come from all over. We’ve got Lawrence kids, a couple Carmel kids, a couple (Hamilton) Southeastern kids and a kid from Westfield.”

“In Lawrence, we’re a limited-resource department. We don’t have all the toys, but what we don’t lack is talent,” said Paul Lushin, an LPD reserve officer and advisor of the Explorer Post program. “We incubate that talent early, and that starts with Explorer Scouting. A lot of Lawrence officers were previously Explorer Scouts. I was an Explorer Scout in 1978 (in Howard County), and I probably wouldn’t be an advisor or a police officer if it weren’t for that first plunge.

“They run it like their own little small police department, because we want to give them a taste of what it’s really like,” Lushin said. “They learn financial and budgetary skills, fundamentals of basic law enforcement, everything down to getting their hands dirty. The officers are the kids themselves.”

All Explorer Scouts train twice each month in areas such as crime-scene management, traffic stops, directing traffic and more, working on fulfilling the post’s goals of being equipped for crime-prevention strategies through the city’s bike-patrol program and providing disaster relief.

New this year, Explorers will begin training with federal agencies to hone in on their disaster-relief skills.

“This year, our kids are beginning to train through different federal agencies,” Lushin said. “We’re seeking donations to buy a van and well-equipped trailer so we can take off if there’s a disaster, like a tornado or flooding, to assist other agencies in Indiana.

“(On a daily basis,) just their presence, because they’re our eyes and ears, helps us with crime prevention, helps people feel safe,” Lushin added. “People know they’re not police officers. They’re well-identified as Explorer Scouts. So people are intrigued and curious. All that helps with our ability to engage with the public and tell our story.”

The city said the donated bicycles will be used by the Explorer Post primarily during special events, like parades, marathons, National Night Out and the city’s annual 4th of July celebration. Explorer Scouts also will participate in ride-a-longs with LPD’s Bicycle Patrol officers.

“(We are) excited to support one of the premiere Explorer Scout Posts in Indiana, Lawrence Police Post 160,” Tony Lloyd, president of Flanner and Buchanan, said. “(We) have long sponsored youth bicycle helmet and safe bicycle riding initiatives.”

“Thanks to (this partnership) these bicycles add an exciting component to our Explorer Scout program – the ability to train with and participate in bicycle patrol-related activities,” Police Chief David Hofmann said. “Lawrence residents should look for our Explorer Scouts riding these bicycles during community events throughout Lawrence and the east side. When paired with our Bicycle Patrol officers, these facilitate excellent mobility, visibility and interaction citizens.”

Lushin said young adults ages 15 to 20 are eligible for the program, with prerequisites of good grades, passing a background check and an interest in law enforcement. To learn more, contact Lushin at plushin@cityoflawrence.org. 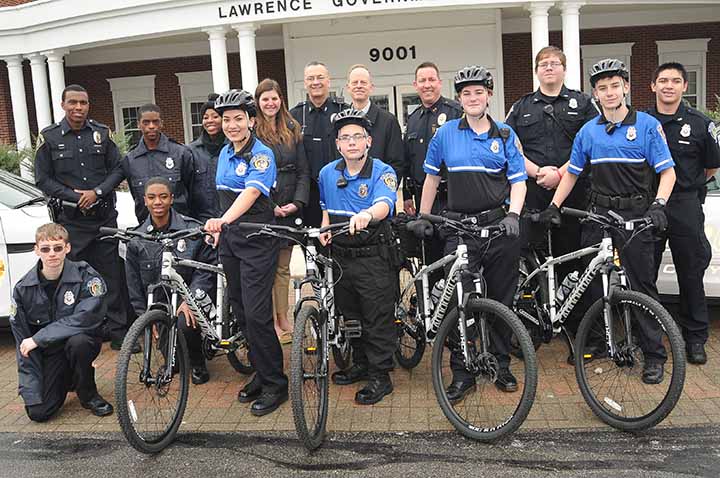