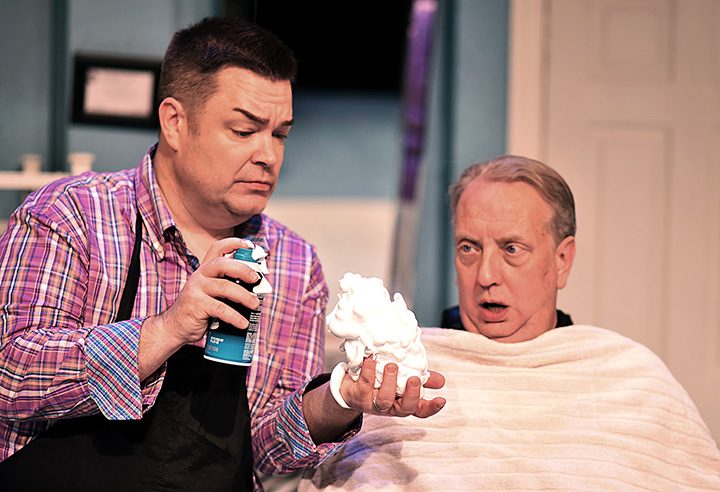 Nick O’Brien (Jeff Stockberger), right, watches as Tony Whitcomb (Daniel Klingler) fills his hand with shaving cream as
he prepares to give Nick a shave in Beef & Boards Dinner Theatre’s 2017 season-opener, “Shear Madness.” Now on stage through Jan. 29, this madcap murder mystery takes place in a not-so-typical Indianapolis hair salon – and the audience decides how it ends. (Submitted photo)

Curry will be directing the Indiana premiere of “Shear Madness,” which will be running through Jan. 29 at Beef and Boards Dinner Theatre, 9301 Michigan Rd., Indianapolis.

“It’s quite a complicated little piece because there is audience participation, and it’s a different show every night,” said Curry, artistic director at Beef and Boards. “It’s the same plot but there are three or four potential suspects who can be voted at the end of the night as the murderer. The audience helps decide each show who the murderer is. The hardest task the actors have in front of them is there are 80 potential comedic bits, but on any given night they might only deal with eight to 10 of them.”

“Shear Madness” opened in Boston in January 1980 and is still running. It’s been running at the Kennedy Center in Washington, D.C. since 1987. It as been running in New York City since 2015 and previously had two stints in Chicago. It started when Marilyn Abrams and Bruce Jordan acquired the rights to the script originally written by a German playwright.

“It was written to be an example of how bad eyewitness testimony can be,” Curry said. “Bruce and Marilyn saw something else in that obscure script and turned it into ‘Shear Madness.’ It’s successful in those three cities that they have completely localized everything in the show to be happening in the very area that the show is taking places.”

Curry said Abrams and Jordan finally allowed other groups to take a stab at putting on their own production.

“To learn some of the inside secrets and shortcuts, they ask you to send the director to Washington D.C. for a few days to observe and learn from the cast of ‘Shear Madness’ and the director there,” Curry said. “That’s what I did in October, and it was a really great time. I learned a lot about ‘Shear Madness’ in those three days.”