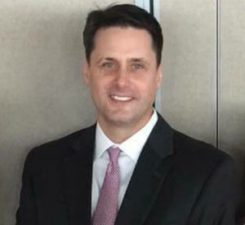 Ten precinct committeemen met Jan. 7 and selected Tony Green to fill Carol Schleif’s vacant seat on the Carmel City Council. Green said that he didn’t have the same name recognition as the other candidates who filed, but he said the caucus was interested in his independence and fiscal conservatism.

“One of the big things that people have told me in the Southwest District is a general concern of the fiscal position, not just currently but looking over time,” he said. “The high expectations of continued growth is of concern and what happens if growth isn’t what we anticipate when it comes to bonds and obligations.”

For the past four years, Green has been the chief legal and compliance officer for the Indiana Public Retirement System. He’s a graduate of the Air Force Academy and an attorney who went to IU Law School in Indianapolis.

Green won on the second ballot 6 to 4, defeating Dan Dutcher, vice president for division III sports at the NCAA. On the first ballot, Green received five votes, Dutcher received 4 and Raju Chinthala, a speech language pathologist who is a frequent attendee of local GOP events, received one vote. Ron Houck, a two-time candidate for City Council, also filed but didn’t receive any votes.

Schleif, who was elected twice to the Carmel City Council to represent the Southwest District, decided in December that she would resign and move to California or personal reasons. She had three years remaining on her term, and Green will serve the remainder.

Green was born in Ohio to two public school teachers and he went into the U.S. Air Force as a pilot. After becoming a lawyer, Green worked as a JAG officer before working as chief of staff and general counsel to the Indiana Dept. of Administration for three years under Gov. Mitch Daniels.

He’s also served as a state judge advocate for the Indiana National Guard and as an adjunct professor at IU Law School in Indianapolis. He would be the only lawyer serving on the Carmel City Council.

Green joked that Carmel Mayor Jim Brainard didn’t know who he was compared to other candidates. He said at least one candidate was backed by some city councilors, so people liked that he was independent.

Green said he looks forward to meeting with the mayor.

“I have a high respect for Mayor Brainard, but I don’t know him well,” he said.

Green said one of his top issues will be financial accountability.