You are at:Home»Current in Westfield»Looking Ahead: Construction to start on riparian corridor, 2017 will see first full year of events center activity 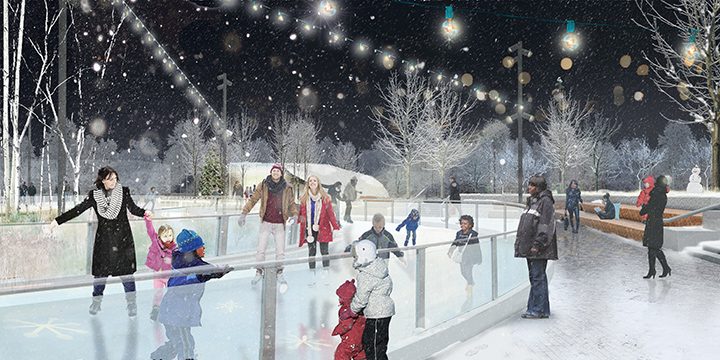 The completed Grand Junction Plaza will include an ice rink. (Submitted rendering by LAND COLLECTIVE)

The City of Westfield saw the completion of the Grand Park Events Center in 2016 and the start of construction at the Grand Junction Plaza in the city’s downtown. The new year will see the construction of the riparian corridor, the next step in the plaza’s completion, and a full year of economic impact numbers for the events center. The search for a part-time youth assistance program early intervention advocate also continues. 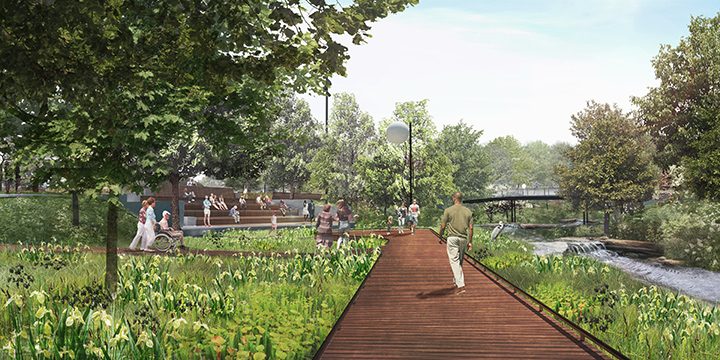 Grand Junction Plaza construction for 2017 will include the riparian corridor. (Submitted rendering by LAND COLLECTIVE)

Construction just finished up for the Mill Street extension, which connects Union Street to Park Street and loops north to Ind. 32. In the spring, Mill Street’s landscaping will be complete and the construction of the riparian corridor – the waterway in the plaza’s design – will begin in July.

“That will take us all of the next construction season at the park,” Mayor Andy Cook said. “This is all the aesthetics of the waterway through the park, that’s (2017’s) project. In 2018 and 2019, based on financing, would be the years of construction of the balance of the park – the greenways, the gathering center, the amphitheater, the buildings, the ice rink. Measuring the effects of the plaza will be a little more different than measuring the return of investment of Grand Park.”

The Grand Junction Plaza was officially approved by the council in early 2016. 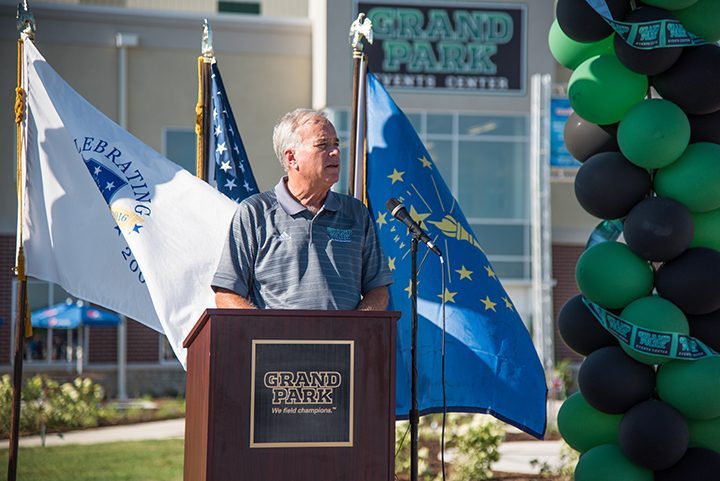 Cook measured Grand Park’s investment returns by naming various businesses that found their way to the city this past year, such as Bub’s, Culver’s, the Monon Marketplace, which includes The Stacked Pickle, Titus Bakery, Spa 32 and more.

“The new thing at Grand Park will be the events center. It hasn’t had much of an impact this year,” Cook said. “We’re adding some amenities to the building that will allow non-sporting events to take place, such as flooring downstairs.”

Hard sections of flooring will be placed to cover one soccer field to allow for trade and RV shows, consignment shopping and more. The floors allow for vehicles to be driven across the field. Extra electrical power also will be added to the building to provide for the shows.

“Really next year, that will be the major impact,” Cook said. “The purpose of Grand Park was to create a tax base and to measure how we are doing there, I think, is the return on the investment. The big story about Grand Park will be the continued and really accelerated building of the hospitality industry.”

Three hotels have been approved, with Cambria Suites breaking ground across from Grand Park in November and Hampton Inn currently under construction. The Grand Park Hotel has not yet broken ground. Cook said two Marriott-chain hotels will soon be proposed near 191st Street and U.S. 31.

The proposed Grand Millennium Center will include a convention center. (Submitted rendering by Cooler Designs and Beyond Architect)

The Westfield Youth Assistance Program was established in 2009 and has spread across the county and the state. Cook said the caseload of children in need of a mentor has extended past the one, full-time early intervention advocate, so the city is looking to hire a part-time early intervention advocate, too. The new position is funded through the WYAP board through funds raised. The new advocate has not yet been named.

“I would like to see a sustainable financial plan in which to pay our professional,” Cook said about the program. “It’s still important we raise money locally through events for our expenses, but not only here in Westfield, but through the county and now throughout state. We have the challenge of providing a sustainable financial income to hire and pay the professionals. (We) propose that statewide. There is an option given that funding can come from a more sustainable source, such as adding a small fee to court costs that would go toward funding the youth assistance program. It’s all about prevention.”