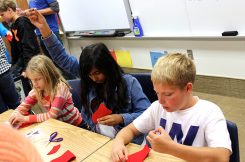 There’s something special about a 25-foot tree in the Indiana State Museum’s lobby.

Not only is it adorned with ornaments created by artists from each of Indiana’s 92 counties, but it’s also covered with 200 wishes from fourth graders from Pleasant View Elementary.

Each student hand-sewed a cardinal as part of the annual project to learn about Indiana’s history. While sewing their birds they also inserted a wish for the next 200 years of Indiana statehood.

“My wish was to have a successful economy and for Indiana to be a success in many years to come,” fourth grader Ellie Benneyworth said. She was inspired by songs that her teacher played for the class about the state written by Indiana artists.

A kiosk near the tree allows visitors to read all of the wishes written by the students. Visitors can then add their own wishes to a paper chain that is added to the tree heralding the end of Indiana’s bicentennial celebration.

“Taking their project and taking it a step further for our guests, they’re able to participate in the program, also,” said David McDaniel, manager of interpretive and performing arts programming for the Indiana State Museum.

Other wishes were for Indiana residents to have homes and food, to be safe from tornadoes and to have better roads.

“It’s kind of exciting because other people get to see the artwork that I did,” Ellie said. “Even though we all had the same (materials), all of them look different.”

The tree is on display until Jan. 1.