You are at:Home»Current in Carmel»Hoosier Village group makes trauma dolls to provide hope, help for kids

Most Monday mornings at Hoosier Village, a senior living community in Zionsville, there is an assembly line of activity for a good cause. 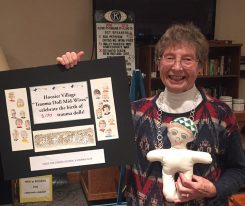 A group of 15 female residents get together for 90 minutes to produce small trauma dolls, which are used by hospital nurses to discern how young patients are feeling.

“These are dolls we make from scratch,” resident Ginger Swenson said. “We buy the fabric. We buy the stuffing. We sew around them and create these dolls. We put faces on them. Then we ship them to children’s hospitals around the world.”

Swenson’s husband, Houston, is a member of the Carmel Golden K Kiwanis Club. So was Fred Koberna, who died in November. Fred and his wife, Arlene, were handling distribution of the trauma doll inventory.

“The joy from our retirement home is that we can do things for someone else, because so often people are doing things for us,” said Swenson, a former Carmel resident who has lived in Hoosier Village for six years. “So it’s really joy.”

Swenson said some women have much more skills than others in making the faces.

“I usually do the sewing,” Swenson said.

The activity is a good way for the women to get to know each other.

“This is a big enough community you don’t know everybody’s names, but when you see them week after week in small group, any small group, it helps you get to learn their names and get to know them,” Swenson said. “So it’s been a great social gift as well as the gift of the gifting.”

The group has been making the trauma dolls, which now totals approximately 3,200, since July 2013.

“When we’re done, they are distributed to local hospitals like Peyton Manning and Riley and some are sent to Mexico and other places as well,” Swenson said.

Swenson said this is a national project of the Kiwanis Club. Some of the hospitals prefer to receive the dolls without faces and the children are then allowed to do the painting themselves. Children can express their fear or unhappiness by drawing on the doll. Since the doll is soft and squeezable, it can be used for comfort when the child is anxious.