You are at:Home»Current in Carmel»Carmel Community»Former veterinarian in India now teaching math in Indiana at Midwest Academy 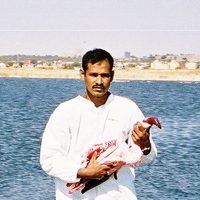 Aiyasami, a former practicing veterinarian in India who was working on his license in Indiana, is now in his first year of teaching middle school math and algebra for high school students at Midwest Academy in Carmel.

“Math is my favorite subject,” said Aiyasami, who said he goes by his first name because he doesn’t have a last name. “I was always interested in math, but my career took a different path.”

After tutoring a couple of family members, Aiyasami, 44, applied to student teach at the Orchard School. He also did some private tutoring on the side. He conducted a summer program this year of Mental Math Fundamentals at Orchard. Aiyasami’s wife, Jessica, works in admissions at Orchard School.

The Orchard School summer program director is Jane Gailey, the wife of Midwest Academy head of school Kevin Gailey. She told him of the Midwest opening.

“It all happened fast,” Aiyasami said of getting the position. “I love teaching math. I love all the kids. I love Midwest. It’s small sized which enables us to focus and work one-on-one with a lot of kids. Since it is a progressive school, it’s a lot of project-based activities.”

Aiyasami received his bachelor’s and master’s degrees in veterinary science from Madras Veterinary College. He was a practicing veterinarian for several years in India.

Aiyasami came to U.S. in 2003 to work on a doctorate in environmental toxicology at the University of Illinois.

“I did the program for about seven years and wasn’t able to get to that finish line,” Aiyasami said. “I had some cool projects. I was working with flamingos in East Africa and Kenya. It was a toxicology project investigating flamingos dying off.”

Aiyasami worked at the Companion Animal Medical Center in Carmel for five years to get more practice before taking his licensing exam.

“I got to do my licensing. I was just enjoying being a technician,” said Aiyasami, who left that job in August. “I worked as a consultant at a crocodile farm (in India) and used to work in a zoo. So I had a long career of working with animals for 25 years.”