You are at:Home»Current in Carmel»Carmel Community»Carmel High School DECA club becomes its own district 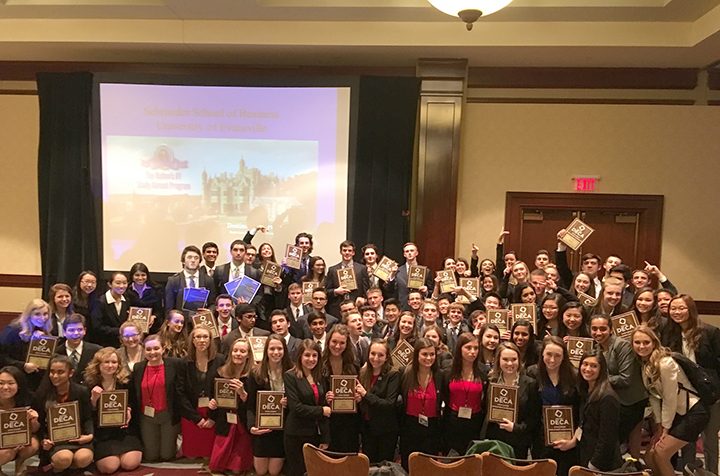 Winning championships and continued growth is a common goal for high school programs around the world. Carmel High School’s DECA chapter has done both.

The chapter has become so large and successful that it was named its own district this year. DECA is a worldwide organization that prepares students to make an impact in entrepreneurship, marketing, hospitality and finance.

Chard Reid, CHS DECA advisor and a teacher at the school, said becoming its own district will be a change for the program.

“Our kids are very competitive. They will view it as a competition,” Reid said. “What I don’t like about it is instead of us versus them, it’s kind of an us versus us approach.”

Carmel’s DECA chapter is the seventh-largest in the world. DECA is comprised of 3,500 high school chapters with 215,000 members.

Reid said that Carmel DECA has enjoyed growth and success because of the experiences it gives students. In 2016, Carmel’s DECA chapter had 21 top 10 finishers in the world.

Jessica Deady, 18, chief marketing officer for Carmel DECA and 2016 world champion, said the experience she has had with DECA has helped prepare her for the future.

“It’s been probably one of the most educational experiences that I could have been provided,” Deady said.

Drew Seketa, president of Carmel DECA, said the chapter has had a positive impact on him and the community.

“It’s an amazing opportunity to make an impact on the community and the school as a whole,” Seketa said.

Because Carmel has become its own chapter, it needs more volunteers to run its district competition. Reid said the chapter has 35 of the 60 volunteers it needs. He said Carmel is looking for volunteers in relevant fields, such as marketing or finance. Volunteers do not need to have a tie to CHS. Learn more and sign up to be a volunteer at carmeldeca.com.