You are at:Home»Night & Day»Back in the Day: 15 volunteers play first CSO performance 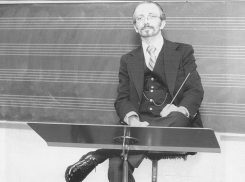 In 1976, 15 musicians came together to play for their own pleasure. From these humble beginnings, the Carmel Symphony Orchestra was born. Instrumental in the formation was the first director of the group, Viktors Ziedonia, a Latvian immigrant who settled in Carmel and was a violinist with the Indianapolis Symphony Orchestra. He directed the first CSO concert in December 1976 with these musical volunteers.

Ziedonia continued as the Carmel orchestra’s leader for its first two seasons. James Edington took over the next three seasons while he continued to teach music lessons.

By 1996, the group had grown into a thriving 65-member orchestra, performing with such guest artists as jazz pianist Peter Nero and the Ramsey Lewis Jazz Quartet. Another highlight of the group’s innovations was its series of programs for children.

The orchestra has since grown to more than 85 musicians with a unique blend of paid musicians and ardent volunteers. More than half of the musicians have been with the orchestra for 15 years or more.

Carmel is the smallest Indiana community to have a symphony orchestra