You are at:Home»Current in Fishers»Ivy Tech class holds contest for new mascot name 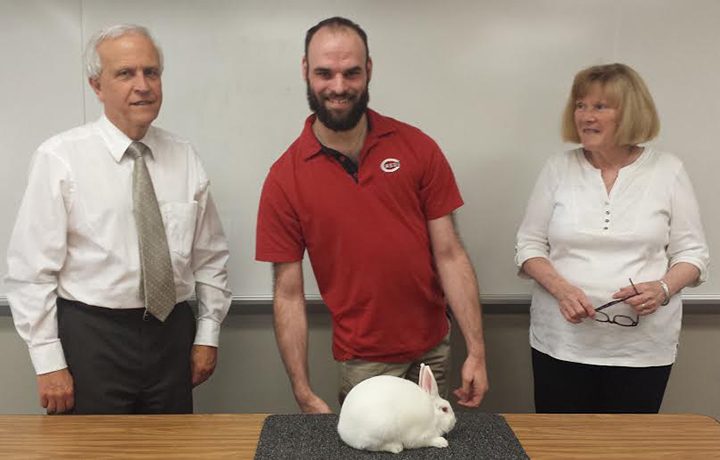 A furry, 5-pound rabbit caused quite a stir when he appeared as a visual in an information speech given by his owner, Ryan Robb, at Ivy Tech’s Noblesville campus last month. “F7” – a Florida White – one of the 48 recognized breeds by the American Rabbit Breeders Association, posed patiently as Robb explained the life of a show rabbit to his class. Robb’s family travels nationwide with their rabbits to compete and recently took top honors in San Diego, where more than 12,000 rabbits competed in the ARBA’s national convention. Robb explained that show rabbits typically are given a “name” with a letter and a number for identification purposes. However, his classmates, who had already appointed the pink-eyed buck as class mascot, quickly objected and launched a contest to give the bunny a new handle. Dozens of submissions were considered, and by the end of the contest, the name Ozzy was chosen. Pictured, from left, Noblesville’s Ivy Tech campus President Dr. Dan Clark, Ryan Robb and Site Director Nancy Stromberg pose with the new class mascot, Ozzy. (Submitted photo)