You are at:Home»Current in Zionsville»Zionsville family grateful to ZFD, neighbors for lifesaving ‘Christmas miracle’ 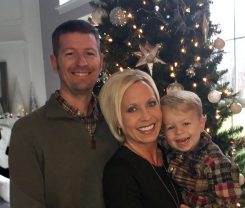 A Zionsville family is celebrating a “Christmas miracle” after neighbors, the Zionsville Fire Dept. and even Santa Claus rushed to the scene of a medical emergency.

Aaron and Joleen Haskell and their son, Henry, 3, were waiting to see Santa ride atop a fire truck through their Fieldstone neighborhood Dec. 12 when cold temperatures urged Aaron Haskell to get his car for the family to sit in to avoid the wind. As he pulled down the driveway, he ran into a tree, where his wife found him unresponsive.

A neighbor helped pull Aaron Haskell out of the car, and the neighbor’s wife, Katie Hermon, a nurse at St.Vincent hospital, began performing CPR. The fire truck and ambulance escorting Santa through Zionsville had been in the neighboring subdivision at the time of the incident and was soon on the scene. Medics continued CPR and provided four shocks from the cardiac monitor to regain a pulse. They transported Haskell to St.Vincent, where he regained consciousness as firefighters were preparing to leave.

“The entire Zionsville Fire Dept. is so grateful that this family gets to spend another Christmas together, and we cannot emphasize enough the importance of knowing CPR,” ZPD stated in a press release.

The Joleen Haskell thanked the department in a note released by ZFD.

“The entire Haskell family cannot even begin to express our gratitude to everyone at the ZFD who responded last Monday night and were responsible for saving my husband’s life,” she stated. “You are a Christmas miracle to us, and we are forever grateful. Thank you, Santa (Andrew) for trading your Santa suit for the rest of the evening to do your job so very well, and thank you to each and every person on the team who assisted. Each of you are a blessing to this community, and we are proud to call Zionsville home.”