You are at:Home»Current in Carmel»Carmel Community»Carmel Clay Schools, Liberty Counsel in discussions over removal of anti-abortion poster 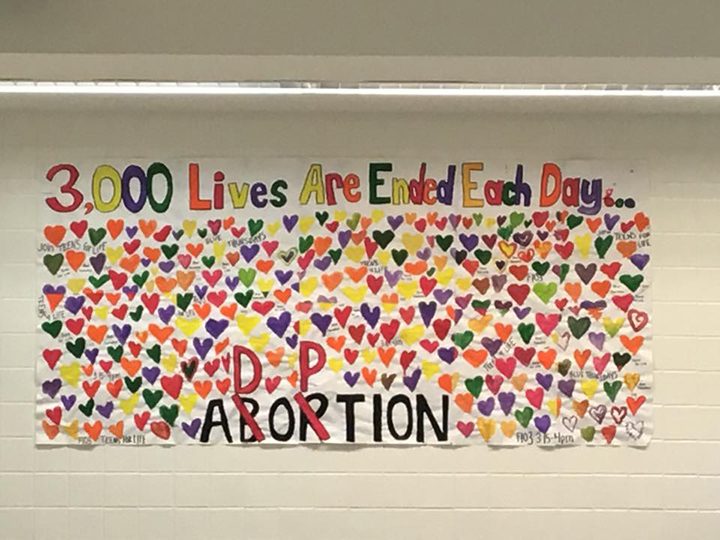 Carmel Clay Schools may be on winter break, but its lawyers have been busy recently, speaking with officials from Liberty Counsel regarding an anti-abortion poster created by a pro-life student group the district allegedly allowed and then removed.

The Carmel Teens for Life’s display featured hearts representing 3,000 abortions that occur each day and the word “Abortion” with the “b” and “r” replaced with “d” and “p” to spell “Adoption.” The poster went up with proper approvals from the school, according to Liberty Counsel – an organization that works to “restore” what it terms the culture “by advancing religious freedom, the sanctity of human life and the family,” according to its website. Ultimately, a student deemed the poster “offensive” and it was taken down.

Liberty Counsel, a nonprofit that provides free legal help, is representing the Teens for Life Club. On Dec. 19, CCS Supt. Dr. Nicholas Wahl said the two sides are in discussions about how to resolve the matter.

“Our legal team is now in talks with Liberty Counsel to work out an amicable resolution – one that will ensure the protection of student rights and encourage freedom of speech,” Wahl stated. “School clubs are a rich tradition at Carmel High School and provide students a positive environment in which they are challenged and inspired to achieve. We hope this matter will serve as a teachable moment for everyone within our community – most notably our students and staff.”

David Orentlicher, a law professor at the Indiana University Robert H. McKinney School of Law and former Democratic state representative, said from his understanding it doesn’t appear that CCS officials were “thinking carefully” through the situation when they ordered the poster to come down.

Although a school does have a right to restrict some forms of speech that are permitted elsewhere – such as promotion of illegal activity or vulgarity – it can’t selectively forbid political speech or certain words just because they might be offensive to someone, Orentlicher said.

Liberty Counsel has asserted that signs from pro-LGBT and Young Democrat groups have been allowed at CHS, one reason its lawyers believe the Teens for Life poster should go back up. Orentlicher said that is a valid point.

“If you’re saying you’re allowing one side to speak and not the other side, that’s a big problem,” Orentlicher said. “In general, if you’re going to censor student speech, you have to be able to make an argument that it’s interfering with the pedagogical mission of the school.”

Liberty Counsel said it first contacted CCS about the issue on Dec. 5. It stated in a press release that it gave CCS a deadline of Dec. 23 to respond with its side of the story before taking additional action, but that changed Dec. 9 when it said that CCS “demanded” Teens for Life club leaders sign an agreement to not seek outside legal help or parental input and not use the word abortion in any communications, among other stipulations. When Liberty Counsel didn’t receive a satisfactory explanation for the district’s actions, it went public about the situation, calling it a “game changer.”

“It is highly improper for school officials to demand students forgo their rights and not seek legal counsel or parental input,” stated Mat Staver, Liberty Counsel founder, in a press release.

CCS officials hoped to have a resolution by the end of the week.