You are at:Home»Current in Fishers»Allisonville Meadows resident writes book on aging

Robert Tinsky has lived a full life and he wants to share those things he’s learned. 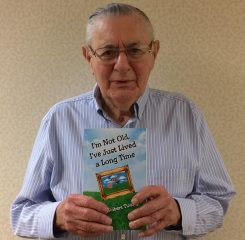 Robert Tinsky with his book.
(Photo by Mark Ambrogi)

Tinsky, 90, is a World War II veteran and retired minister who lives in Allisonville Meadows in Fishers. He recently wrote his fourth book, “I’m Not Old, I’ve Just Lived a Long Time.”

“I call it a hodgepodge,” Tinsky said. “It has suggestions on how to deal with various aspects of aging. Each chapter I have a series of jokes that deals with that particular phase of life. There are some devotional thoughts. Then part of it is my experience of how I dealt with aspects of aging.”

Tinsky retired as minister in South Bend in 1991 and then returned to Oblong, Ill., where he had previously been a minister. He soon became a minister again near Oblong before retiring again in 1996. He would then still occasionally fill in when a minister was on vacation.

Some examples of things to learn in the book are how to dress so you don’t look like a dork, how to keep your driver’s license longer and devotional thoughts to help you draw closer to God.

The humor includes gems like the advantage of exercising every day is that you die healthier, or the three ways men wear their hair: parted, unparted and departed.

“I’ve been pleased by the reception,” Tinsky said of the book.

Tinsky has a daughter, Robin, who lives in Carmel, and another daughter, Rhonda, who recently moved from Carmel to Indianapolis. Tinsky and his late wife, Thelma, moved from Oblong so she could be treated at St.Vincent Hospital when she was stricken with cancer. They then moved into Allisonville Meadows’ assisted living. Thelma died in September 2015.

Tinsky has one other daughter, Ruth, and two sons, Rick and Rodney. Rick followed his dad’s path and is a minister in West Virginia.

His book was published earlier this year. It is available at createspace.com/6471182 and on sale at Allisonville Meadows’ front desk.

Tinsky also wrote “The God of the Valleys,” “A Christian is …”  and his autobiography, “Twice Born.”

“I’ve always been interested in writing all my life,” Tinsky said. “I’ve written numerous articles for our church paper and several different church publications. Writing has always kind of been in my blood.”