You are at:Home»Current in Fishers»$40 million private investment The Yard proposed for 116th Street and IKEA Way

The Yard is a culinary and entertainment center proposed on 17 acres on the southeast corner of 116th Street and IKEA Way. (Submitted rendering)

In about two years, residents of Fishers may see a culinary accelerator flanked by 10 to 12 restaurants centered around a green space with the whole development spanning 17 acres. The City of Fishers announced a $40 million private investment culinary and entertainment center called The Yard earlier this month, and the city council unanimously approved an economic development agreement with developer Thompson Thrift Retail Group at its Dec. 19 meeting. 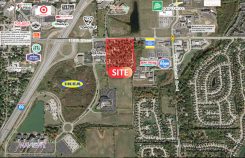 The Yard is a culinary and entertainment center proposed on 17 acres on the southeast corner of 116th Street and IKEA Way. (Submitted renderings)

The city also will master lease two1,500-square-foot buildings or one 3,000-square-foot building to be used as a culinary or restaurant accelerator. Brandon Dickinson with the economic and community development department introduced the project to the council at its first reading. Dickinson said the city would have a very low investment with the master lease, with a payment of $1 a year.

“That gives the city and its citizens opportunities to bring some really interesting concepts that might not have thought about Fishers previously,” Dickinson said.

The 17 acres is unincorporated into the City of Fishers and considered to be part of the Delaware community. Part of the process is annexing the land into the city before development can begin. The economic development agreement plan with Thompson Thrift Retail Group will include the establishment of a tax increment financing district consisting of the previously unincorporated parcels, and issue economic development bonds available to the developer. The bonds are anticipated at approximately $7.1 million. A waiver of impact fees also was included in the agreement.

“As a long-time Fishers resident, I have seen tremendous opportunity to develop a project like this that has a restaurant-heavy focus,” said Ashlee Boyd, managing partner with Thompson Thrift. “I don’t believe there’s anything to this scale being done with a culinary accelerator concept like this (in the state).”

Although the council approved the economic development agreement, it did not vote on the planned unit development that would rezone 18 acres from residential to commercial. A vote annexing the acreage into Fishers also was not yet taken.

Steve Hardin, an attorney representing Thompson Thrift, mentioned that many chefs hoping to start a new business do not have access to commercial-grade kitchen equipment.

“Chefs will have the opportunity to bring friends and family out to see what does or doesn’t work,” Hardin said. “They can move to a larger space within the accelerator and eventually grow into a permanent space elsewhere in the project. Thompson Thrift is really excited for these 10 to 12 restaurants that will be enhanced with the (culinary) accelerator.”

The details of the culinary accelerator are not finalized, but a press release from the City of Fishers stated that Mayor Scott Fadness asked the Indiana Restaurant and Lodging Association to assist in the concept development.

Currently, there are 28 homes on the acreage planned for the development, but the homes will be razed after annexation and the rezoning is approved. City councilor Brad DeReamer said the homeowners were paid a premium well above the appraised value of their homes.

Dickinson said there is not a specific date when the project is expected to be completed, but there are specific dates for deadlines along the way to keep development on track.

The Yard is a culinary and entertainment center proposed on 17 acres on the southeast corner of 116th Street and IKEA Way. (Submitted rendering)

During its first reading to the council, The Yard was described as a culinary accelerator with 10 to 12 different restaurants embedded in the development. At the heart of the development would be the culinary accelerator(s) with an approximate acre of green space. In that green space, Steve Harden, an attorney representing developer Thompson Thrift Retail Group, said could be food trucks. The food trucks could become part of a “Food Truck Tuesday” or program of a similar nature.

In addition to the food trucks, Hardin said there are two permitted uses of drive-thru  windows, not including food trucks or the culinary accelerator. City councilor David George didn’t agree with that specific concept.

“I would rather see zero,” he said of the drive-thrus. “It’s a partnership, and we are helping out and trying to ramp this up.”

Although multiple councilors expressed concern about drive-thru restaurants, a vote was not taken on drive-thrus.