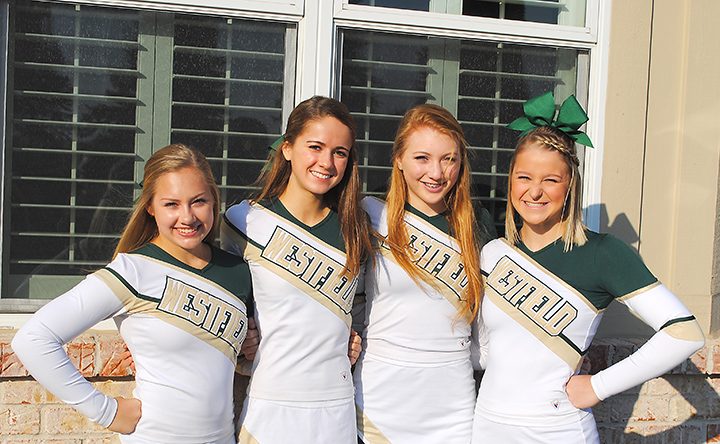 In past years, only one Westfield High School cheerleader was chosen and then traveled to London, England, for the New Year’s Day parade after being selected as All-American.

This year, four girls are going. Sophomores Sydney Paquette, Hope Housefield, junior Rhiley Sperry and senior Skyler Stanifer will arrive in London Dec. 27 and stay until Jan. 2. Six WHS girls qualified but only those four chose to go to London to represent their All-American title.

“We were at the Universal Cheerleaders Association camp, and we all tried out for this thing called All-American, and we had to do a cheer, a dance and a jump,” Paquette said about the process. “People come from all over the country.”

Two camps were held in Indiana, and 10 percent from each camp was selected as All-American, which qualified the girls to travel to London and walk in the New Year’s Day parade.

“I never thought I would be able to go to London in the first place, so I think it was a really cool opportunity we get to be in it,” Housefield said. “There’s a big tour set up for us day-by-day of what we’re going to do.”

Jensen Bailey was the WHS cheerleader who traveled to London in 2014. She now cheers for Indiana University. All four WHS cheerleaders traveling to London this year hope to pursue the sport in college. Sperry has cheered for seven years, Paquette for 12, Stanifer for 12 and Housefield for two, although she pursued gymnastics prior to cheer.

“I like the atmosphere of everything,” Paquette said. “I like being on a team and cheering for the football games and all that.”