You are at:Home»Current in Geist»Fishers Police Dept. seeing increase in community engagement due to crime app

Six months after Fishers Police rolled out its Fishers Crimewatch app, the department is still seeing success in engaging with community members they believe weren’t comfortable communicating with officers previously. 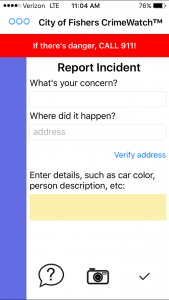 “It’s another community piece to engage the percentage of population that doesn’t want to talk to anyone – they want to talk via text,” Asst. Chief of Police Ed Gebhart said. “Or they were hesitant to call 911. It’s another option in the toolbox.”

The idea for the app came to Gebhart after he went into a roll call and saw a large number of officers on their phones.

“At first I thought, ‘Wow, they aren’t listening to me,’ and my next thought was if this is the way a large percentage of my cops communicate, then how many in the community want to communicate this way,” he said. “How many are sitting on their couch saying, ‘Is what I’m seeing big enough to call the cops?’ So I thought let’s link the person on the couch to an officer and let them determine if it’s big enough to respond.”

The app was developed by Auri Rahimzadeh, an instructor at Eleven Fifty Academy in Carmel, and donated to the city. It lets users drop a pin at their location, report an incident and even post a photo. An officer in the area receives a notification to respond.

“How many times do we get a picture of the person we are looking for before we arrive? That piece has become important to us,” Gebhart said. “I think in order for us to be better crime fighters we need to get information from the source, and this community piece allows that to happen.”

To date, use of the app has resulted in one arrest. As for a decrease in crime, Gebhart said the analytics aren’t in place yet to show those results. Instead, he is looking at the number of calls.

“We are up to over 400 calls that have come through it. We always say if it doesn’t feel right then let us come check it out,” he said. “We are assuming these are people who chose not to call in the past because they didn’t want to bother anyone.”

The app – available for Android and iPhone – launched in late May with approximately 1,000 people downloading it by the end of the month.  Gebhart said approximately 3,500 people have downloaded it, with 71 officers now trained to use it. He said Fishers hopes to take the app county wide in the near future.