You are at:Home»Current in Zionsville»Whitestown, Amazon partner to manage holiday traffic 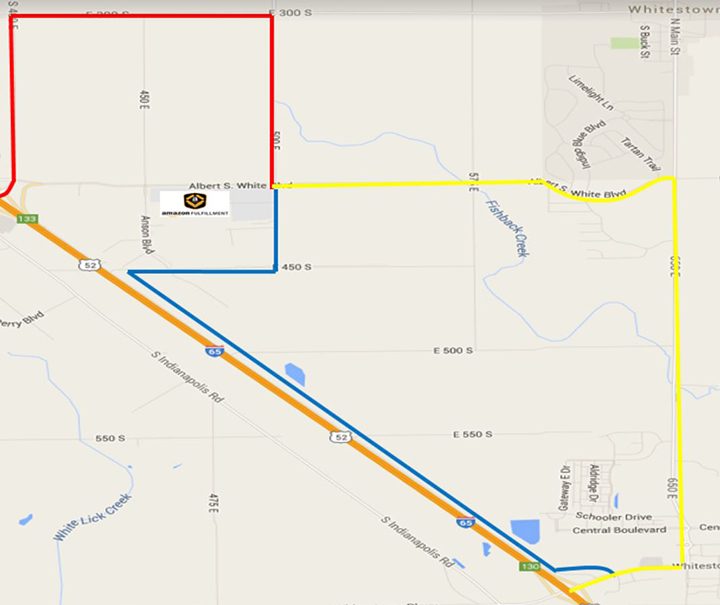 This map shows the different routes used by Amazon employees and other workers in the area during the holiday season. (Submitted photo)

With a workforce that drastically expands during the holidays and a constant stream of deliveries, officials at Whitestown’s Amazon Fulfillment Center work carefully with town officials and other nearby businesses to minimize its impact on traffic.

Traffic planning meetings begin in August. This year the seasonal traffic pattern went into effect Nov. 21 and will last through Dec. 22.

“Amazon invites representatives from all of the All-Points businesses to these planning meetings along with representatives from public safety, INDOT and public transportation,” Whitestown Police Chief Dennis Anderson said. “The main traffic pattern was established a number of years ago with the pattern being tweaked each year as a result of lessons learned from the year before.”

New this year are updates to Exit 130 along I-65 and Perry Worth Road, which have improved traffic flow this year, Anderson said.

Amazon is seeking to minimize its impact on traffic by offering a shuttle for employees between the Indiana State Fairgrounds and the fulfillment center. It also encourages employees to use the Central Indiana Regional Transportation bus service. Most of Amazon’s 6,000 or so employees during the holidays won’t park on site.

Amazon also pays for portable light towers at key intersections to increase safety and hires off-duty police officers to help with traffic from 4 to 8 a.m. and 4 to 8 p.m. each day. Anderson said Amazon has been a “wonderful partner” throughout the year and has helped sponsor events such as National Night Out.