Westfield High School teacher Becky Sondgeroth wanted to give the kids in her introduction to business administration class a taste of what it’s really like to present a business plan to potential investors. Students decided on a business and then proposed it to two businessmen for advice. 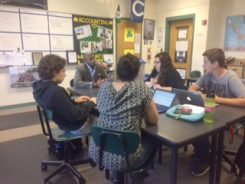 The group The Green Spoon works on its business plan. (Submitted photo)

“This is a college-level class. It is a pretty intense course,” Sondgeroth said. “They have to apply everything they learn to an overall business plan. Over the summer, they had to interview people and come up with some ideas of what businesses they would want to start in Westfield to address whatever needs there were. Then they applied different facets of the business – marketing, HR, operations, finance or management – to their plan. They’re doing multiple drafts throughout the 12-week trimester.”

“The guys sat down with each group and had them pitch him their idea. It’s similar to  (the reality TV show) Shark Tank but not giving them money at the end,” Sondgeroth said. “This year he brought along another individual with him who does this for a living. It’s just a really valuable time for the kids to learn from someone outside the school.”

Students listened to the advice and applied it to their plans. Fankhauser and Veramallay believe a few could actually be pursued further if the students wanted to do the work.

“Shane was a nice addition because of his background. Basically, there were two groups out of the eight that he thought had tremendously good ideas that could really happen if they wanted to go after it. He’s offered himself as a mentor and to help if they want to pursue financing with the business,” Sondgeroth said.

Sondgeroth said this type of real-life experience is a great preparation for her students.

“Without a doubt, I think all eight groups got ideas from them that they’ve incorporated into their business plan, but there is probably a couple of the business plans where some of the kids were totally excited and wanted to move forward,” she said.