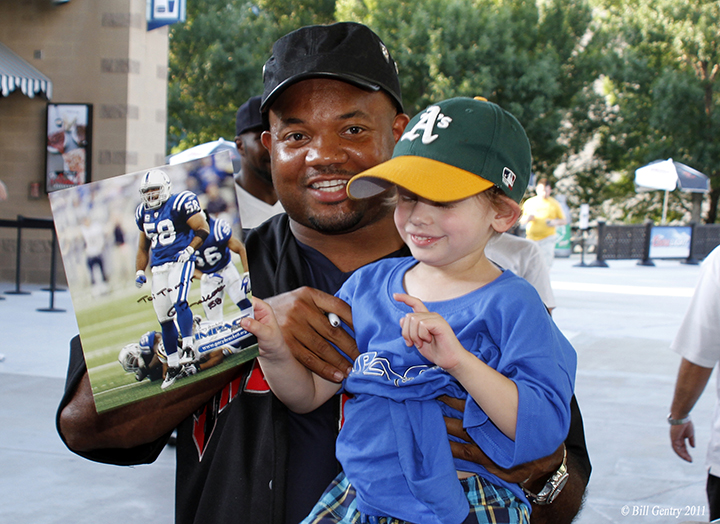 Gary Brackett pauses with a young fan after signing an autograph. Brackett has been active in the Indianapolis community since leaving football in 2011. (Submitted photo)

If anyone was prepared to make a drastic career change, it was Gary Brackett. The former NFL linebacker turned restaurant owner felt his time with the Indianapolis Colts was great training.

“In football, because of the high pressure situations, you have to be pretty on and pretty buttoned up emotionally to handle that fire. It’s no different in a restaurant,” he said. “When it’s Friday or Saturday night, tickets are flying and it’s busy and it’s crazy, it’s the same thing. It’s a two-minute drive, and you can’t lose your cool or you’ll lose everyone.” 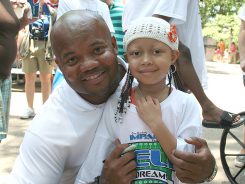 The Carmel resident is the owner of Stacked Pickle, a restaurant and sports bar with nine Indiana locations that include two in Carmel and Indianapolis and one in Fishers and Westfield. After making an initial investment in the West Carmel location in 2012, he was sold on the business and became the full owner in 2014. He also owns CharBlue, a steakhouse in downtown Indianapolis.

It’s not what Brackett originally thought he’d do after football, but he feels it’s a great fit. He’s come full circle in a way. His first job was as a dishwasher at a restaurant in his hometown of Glassboro, N.J.

“I always wanted to be a coach and coach NFL football, but after having three kids and marrying my wife, I didn’t think that was a possibility,” he said. “What I do now is an extension of coaching with my general managers, with my team members, when they go through tough situations.”

Bryce Gerlitz, the general manager at the Stacked Pickle’s 96th Street location, said Brackett has been instrumental in his rise through the ranks since being hired as a server in 2011. He said Brackett, much like a coach, knows how to inspire his team, even if it involves telling them something they don’t want to hear, such as when he told Gerlitz he wasn’t quite ready to make the jump to management.

“I’m sure you can equate the same thing to coaching a sports team,” Gerlitz said. “It creates the hunger and makes you try even harder. That’s definitely what happened to me.”

Brackett, 36, grew up a Philadelphia Eagles fan and remained close to home for college, studying business economics at Rutgers University. He didn’t move to the Indianapolis area until 2003 when he was signed as an undrafted free agent with the Indianapolis Colts, where he was the defensive captain of the 2006 Super Bowl championship team. 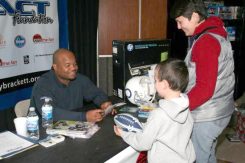 Gary Brackett signs
an autograph for a fan.
 

The Colts released Brackett in 2011, but he stayed in the area because he “met a girl,” he said. Bracket and his wife, Ragan, a graduate of The Orchard School and Brebeuf Jesuit Preparatory School, married in 2009 and have three children, Gabrielle, 7, a student at Towne Meadow; Gary, Jr., 5; and Georgia, 3. Ragan Brackett is in her final year of a family medicine residency at Community Hospital East.

Deciding to build a home in the Indianapolis area wasn’t a difficult decision, Brackett said.

“Indianapolis always treated me like one of their own. When I played for the Colts, I felt the warm feeling when I was out in the community engaging, and it just made me feel very comfortable raising my family here,” he said. “I think it’s a great town. It’s a town where people support their own, and I see a lot of that in the community when people come in (to Stacked Pickle) and they choose us sometimes over our national competitors because we’re local.”

“Everything is like 20 or 30 minutes away. Carmel gives me the ability to be centralized,” Brackett said. “You can’t discredit how good the school systems are.”

Brackett describes himself as a “hands-on” restaurant owner and takes pride in being accessible to all of his employees. Gerlitz said he sees Brackett in “The Pickle” once or twice a week. 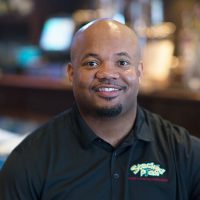 Gary Brackett is the owner of Stacked Pickle.
 

“He’s not going to be someone who’s ever going to chastise you if you make a mistake,” Gerlitz said. “He’s all about investing in people and building them and helping them learn from their mistakes.”

The TV screens covering the walls give Brackett plenty of time to stay up-to-date on NFL football, a part of his life he misses sometimes.

“Initially, you go through the same emotions when you’re a former player when you’re angry, upset, you still want to play, but you come to the realization that you can’t play no more. You’re physically incapable of making some of those moves,” he said. “I still love the game. I’m still cheering the Colts, still want them to succeed.”

Smaller than a typical NFL linebacker, Brackett was known for his grit, determination and commitment on the field. His pro football days are behind him, but he’s the same team player, laser-focused on improving and growing Stacked Pickle.  He hopes to open one or two stores in 2017 and is eyeing sites in Avon, Brownsburg or Plainfield for a franchise.

“I don’t ever not work,” Brackett said. “I’m always available, and the team knows that.”

In addition to his duties as a restaurant owner, husband and father, Gary Brackett strives to make a difference with people in need through his Impact Foundation, a nonprofit he and his wife founded in 2007.

The foundation has four initiatives:

“I wouldn’t be here if it wasn’t for the help of others,” said Brackett, who grew up in a low-income family. “A lot of people think of foundations as people giving out handouts. I look at them as giving people hand-ups. Some people are on the ground and they just need someone to reach out to them and pull them up. They can be self-sustaining from there.”

Learn more about the Impact Foundation at GaryBrackett.org.