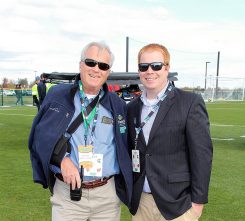 “We received positive feedback from the teams and attendees about the quality of our facilities,” Cook said. “It was also a fantastic opportunity to showcase Grand Park on a national stage with the coverage on Big Ten Network.”

It was the first time the semifinals and championship were held at a neutral site. The semis and final will return to Grand Park in 2017.

Don Rawson, president and CEO of Indiana Sports Properties which manages Grand Park fields, said the Big Ten Network carried all three games live and the two announcers praised the efforts of Grand Park and the City of Westfield early and often.

The Nov. 11 double session paid attendance was 2,940. Games were at noon and 2:30 p.m. while all area students were still in school.

“The field was cut at 7/8 inch and was unanimously praised by the teams and Big Ten Conference,” Rawson said. “With more time to plan and prepare, I am confident that the (2017) attendance can be doubled from 2016.”

Rawson said there was a tremendous team effort and support from many volunteers from Grand Park to ensure the event’s success. Rawson said he did learn some things to help with next year.

“Due to the television broadcast, this event took much more detailed preparation and execution than a typical event at Grand Park,” Rawson said. “This event needs an event manager focused on just this event to ensure all T’s are crossed and I’s are dotted. Indiana Sports Properties will need to hire more people and use fewer volunteers in certain key roles.”

Rawson said there has been some early discussion with the Big Ten officials in case the Big Ten Women’s Soccer Tournament moves to a neutral site in the future.