John Armstrong and Zachary Spicer became good friends through the theater world at Indiana University. They collaborated through the years and decided to form Pigasus Pictures. 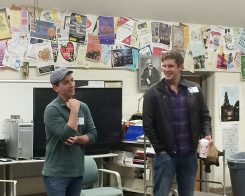 The co-founders made a feature film in February called “The Good Catholic” staring Danny Glover and John C. McGinley.

“We filmed it in Bloomington,” said Armstrong, a Brownsburg High School graduate. “It’s going to be released in 2017, and we’re preparing for our next feature film. In the interim, we want to grow the film industry in Indiana and get young people involved and create opportunities for filmmakers. So we decided to do this competition.”

Pigasus Projects is accepting short film screenplays from students nationally. They will select a winner and get a corporate sponsor to fund it. The deadline for the screenplays (12 pages or less) is Dec. 23.

Spicer, who has appeared in the TV shows “Blue Bloods” and “Gotham,” also has a role in “The Good Catholic.” The story is written by another IU friend, Paul Shoulberg, and is based on a true story about his parents.

“We couldn’t have made ‘The Good Catholic’ if we had made it in any other state because all of the Hoosiers who came out and helped support us and donate stuff to make the movie,” said Spicer, a Greencastle High School graduate. “We want to show kids it can be done. We didn’t know what we were doing, and we figured it out.”

The company is based in New York, but Armstrong and Spicer plan to move it back to Indiana.

“It’s cool they are offering something like this for people my age,” said CHS senior Atalie Altman, who plans to study film at Hillsong College in Australia.

Altman has started writing a screenplay she plans to enter.