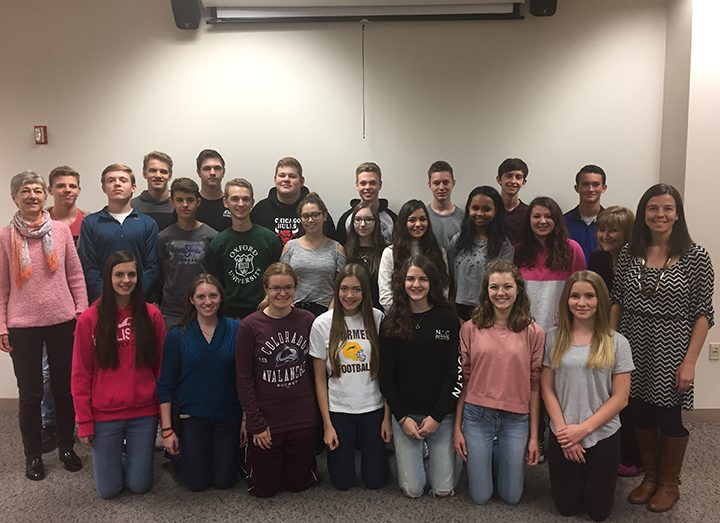 Carmel High School students in German language classes learn a lot about the cultures of their overseas brethren, but even after years of study, some students did not know what to expect when 16 German exchange students came to live with them for three weeks this fall.

“The biggest thing I learned is how similar they are,” senior Case Evanson said. “When you think of Germany, you think of lederhosen, big Bavarian pretzels and beer. But when the Germans came over, they looked exactly like us. When you have a big group of students, you wouldn’t be able to tell who was from where.”

In late October and early November, the 10th grade students traveled from Florsheim, Germany, a suburb of Wiesbaden and just 25 minutes outside of Frankfurt to Carmel via the German American Partnership Program (GAPP). It is a program that had been going on for years at CHS, but ended about three years ago with the previous German high school. The GAPP exchange restarted in 2016 and 16 CHS students will spend three weeks in Germany in June. Since Germany has year-round school, CHS students will be able attend classes while staying with host families.

The program costs about $2,000, which is mostly comprised of airfare and is open to CHS German students in levels 3, 4 and 5. Both countries’ government help subsidize the teachers’ travel for the program.

Angelika Becker, another CHS German teacher, said the connection with the German exchange students helps CHS students practice using the language for years to come since many stay in touch.

“One of the biggest advantages is that we’re starting friendships,” she said. “They are staying in touch. They go to each other’s graduations and weddings and become lifelong friends.”

Students from Germany said the biggest differences they noticed from their own high school is that everything is bigger in Carmel. The houses are bigger. The buildings are bigger. Their town of Florsheim is a small community of about 20,000 people. CHS has more than 5,000 students while their school, Graf-Stauffenberg Gymnasium, has a little more than 500 and includes grade 5th through 12th.

“American kids are really independent,” said Janice Hermann, German exchange student. “Here, you can drive anywhere you want and get your own job. They have lots of independence and it’s really cool.”

Joel Gunderman, senior at CHS, said he thinks German students know more about the world outside of their country, compared to Americans. He said most of the German students knew all of the American songs on the radio already and regularly used American slang.

“I learned how multicultural German kids are compared to kids from America,” he said. “They speak more languages than us and they know about all cultures.”

“I thought that Trump was really, really unpopular,” Hermann said. “But when I came here I found out that some people do like him and now he’ll be president. We didn’t know that in Germany. We were really surprised to see him win.”

Most CHS students said they are really excited to visit Germany this summer and some even said that the trip is a good motivation to keep studying the German language.

“I’m nervous,” said CHS senior Leigh Heck. “They’ve been studying English for six, seven or even eight years and I’ve only been studying German for four.”

The GAPP exchange has already been verified for the 2018-2019 school year and students interested in participating will receive information next year.