U.S. Rep Susan Brooks is well aware of how rare it is to be named a Blue Ribbon school. 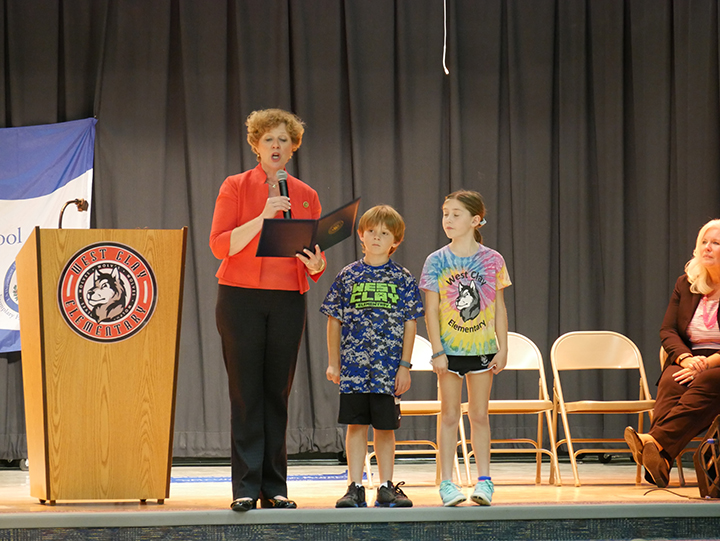 So when a school in her congressional district achieves that honor, she likes to help celebrate. Carmel’s West Clay Elementary recently earned the distinction of National Blue Ribbon School for 2016, the first time it has earned the honor.

“They are one of only 329 schools in the entire country chosen for this honor,” Brooks said. “They don’t apply for this honor. The Dept. of Education reaches out and asks schools to apply for it. They recognize and choose these schools. It’s not something that happens overnight.”

The school held a ceremony, which included Carmel Clay Schools Supt. Nicholas Wahl, the students and staff, to unveil a banner Nov. 18.

“It’s our philosophy that we have that we meet every child where they are,” said Jennifer Szuhaj, in her sixth year as West Clay principal. “We individualize our instruction so they can grow. So, we have a philosophy that you don’t have to be sick to get better. We practice that every day, it’s that whole growth mindset.”

“We get tons of support from the parents. Our PTO is phenomenal,” Szuhaj said. “Our teachers are leaders in different capacities. Every teacher in this building contributes in a leadership capacity. The teachers work so hard and the parents put so much into it. It’s just great affirmation that we are doing good things. The next thing is how we keep moving it forward.”

Brooks entered the school’s accomplishment in the Congressional Record.

“We’re been keeping a Congressional Record since 1789, so now this accomplishment of (West Clay) earning the award is in our country’s history books,” Brooks said. “It’s important to celebrate their accomplishments, the students, the parents and the teachers who are all part of this.”