You are at:Home»Current in Carmel»Carmel Community»Carmel police officer statue removed after hit-and-run accident 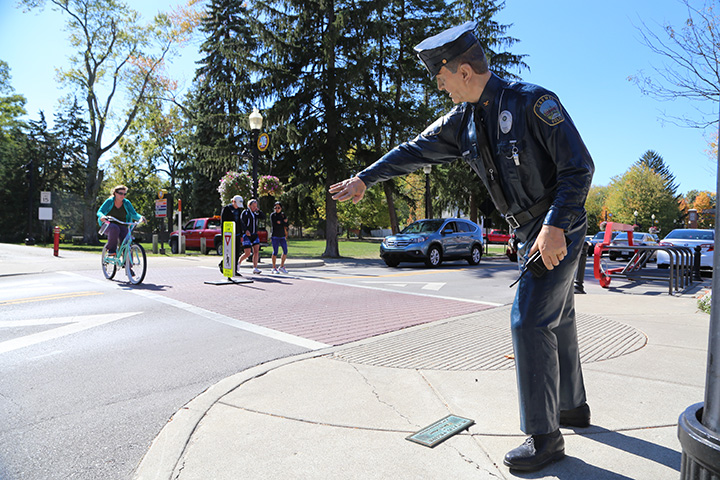 The police officer statue at Main Street and the Monon Greenway has been removed after being struck in a hit-and-run accident. (File photo)

It’s there to remind motorists to slow down and use caution, but its warning didn’t stop the well-known police officer statue in the Carmel Arts & Design District from being the victim of a hit and run accident Nov. 26.

Police said a driver heading eastbound on Main St. struck the statue at 4:09 a.m. and fled the scene. With the help of a witness, police tracked the vehicle and found it parked in the Sophia Square parking garage.

Police identified the driver as Glenn Lockett, 45, of Carmel. They said witnesses reported that Lockett misjudged the turn onto 2nd Ave. and struck the “Oh, It’s You, Welcome” statue on the northeast side of Main Street and the Monon Greenway.

Charges are pending as the prosecutor reviews the case. Police said that Lockett reported being tired and misjudging the turn. They did not explain why he left the scene of the accident.

A crew from the Carmel Street Dept. removed the statue the morning of Nov. 26. An estimate for the damages has not yet been released.

The statue, created by artist J. Seward Johnson Jr., memorializes Carmel Deputy William Frank Carey, the only Carmel police officer to die in the line of duty. He was shot by Rev. TJ “Cyclone” Johnson, a traveling evangelist from Kentucky, in 1900 during a court hearing. Johnson was then fatally wounded via gunshot by an unknown bystander.