You are at:Home»Current in Carmel»Carmel Community»200 apartments proposed for Midtown area 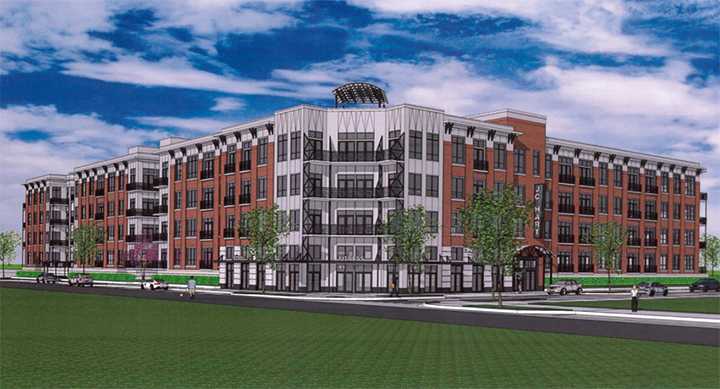 Midtown Flats is proposed to bring more than 200 apartments to the Midtown development. (Submitted photo)

More than 200 rental units could come to the Midtown area. Old Town Design Group has submitted plans for an apartment building called Midtown Flats, one of many new buildings planned for the area.

Old Town partner Justin Moffett said pieces are being shuffled as momentum builds for the $150-million-plus project along the Monon Trail north of the Carmel City Center and south of the Carmel Arts & Design District.

The Carmel Planning Commission is considering plans for Midtown Flats, a 216,112-square-foot, four-story building east of the Monon Trail. Developed by Old Town Design, the complex would have about 206 apartments with a swimming pool, coffee shop and fitness center with more than 300 parking spaces in underground parking and a nearby garage.

The building would have frontage on Monon Avenue, which is the name for the proposed expansion of the Monon Trail, along with on-street parking and 12-foot-wide sidewalks to promote connectivity. Certain parts of the project would be done by Old Town Design Group and others would be a joint effort between Old Town and the Carmel Redevelopment Commission.

The architectural design of the building is reminiscent of an old industrial warehouse, which is consistent with the design and feel of the rest of Midtown. It will have a combination of brick and metal paneling with large windows on all sides and a concrete base, according to the plan commission report.

The Carmel Plan Commission will discuss the Midtown Flats project at the Dec. 6 meeting of its subdivision committee.

Midtown Flats would be to the south of several proposed buildings, including Midtown East, Midtown West, Merchants Bank Headquarters, the 140,000-square-foot Allied Solutions headquarters, a 580-space parking garage and a new tap room and distillery for Sun King Brewing Co. Allied Solutions and Sun King are expected to be complete by fall/winter 2017.

Lots have changed since the project was announced two years ago, Moffett said. Some buildings are in different spots than the original map.

Old Town has moved its proposed office building to make way for the Sun King building. It has decreased its involvement in Midtown West while it is still a partner. Old Town also has decreased its involvement with the Merchants Bank headquarters building and the city market concept because that building is now gone. Some of the city market idea might be added, on a much smaller scale, to the Sun King building with a “foodie court” concept of a few high-end food providers offering food to pair with Sun King’s beverages since the brewer appears reluctant to enter that market, Moffett said.

Demolition on several occupied Midtown buildings, including Miller Auto Care and the laundromat, near Range Line Road has been delayed. Moffett said it’s likely Miller Auto Care will need to relocate to a new building to make way for new Midtown development, but other projects are being constructed first. At one point, it appeared those buildings would be demolished for a parking garage, but that’s going elsewhere, Moffett said.

The good news, Moffett said, is that several buildings are under construction, and after a slow start it appears the Midtown will begin to take shape one year from now.