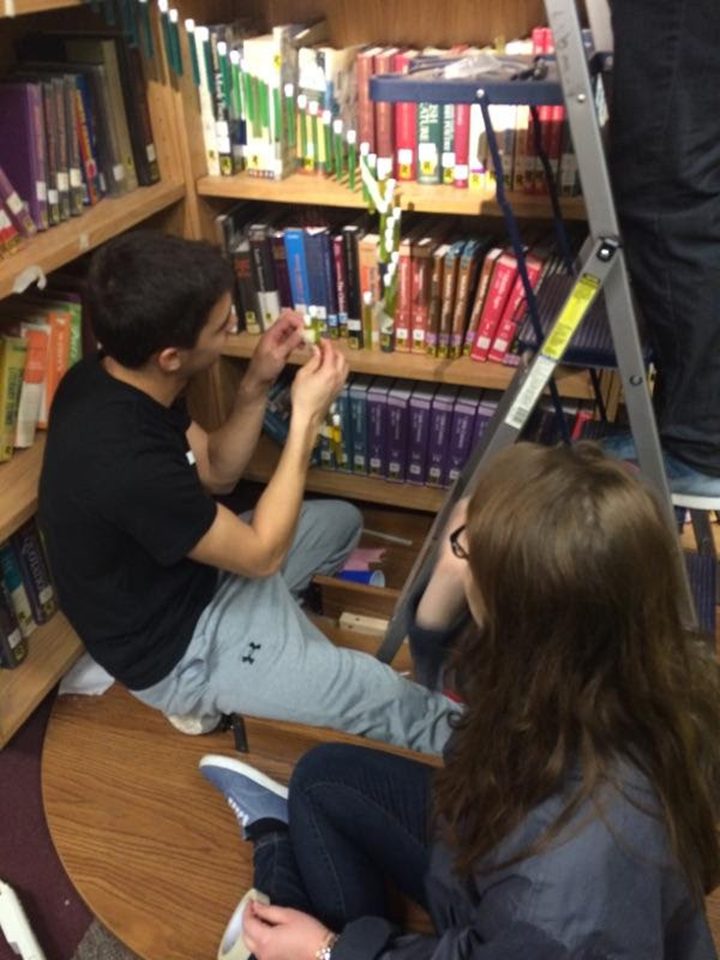 Sharon Hoffman and Justin Mamaril construct a chandelier out of test tubes to follow the Fibonacci spiral and hung it in the Westfield High School library. (Submitted photo)

Westfield High School seniors Sharon Hoffman and Justin Mamaril spent almost a year working on a project to be displayed in the WHS library, but it wasn’t for a school assignment.

“I think the idea originally came from another project I saw. It was a similar project, just a lot smaller scale,” Mamaril said. “I showed Sharon, and we thought to make it really big and put it in the middle of the library.”

“I love chemistry. It is literally my life, so when he showed it to me I thought, ‘Oh my gosh, we have to do that,’” Hoffman said.

The pair hung test tubes filled with colored corn syrup to prevent evaporation from plexiglass panels and had the project installed to dangle from the library ceiling. The chandelier follows the Fibonacci sequence spiral, and it’s more than six-feet tall. The color scheme follows the pH indicator of red cabbage, and it progresses from pink to purple to blue to yellow.

“We both really like math,” Mamaril said on why the pair decided to create the chandelier.

And they hung it in the library to acknowledge where the project all began last fall.

The pair is a part of the Idea Farm, a co-working space in the library for students to work and create projects.

“(Hanging it there) was just showcasing our work, and (Librarian Joel Bruns) was our mentor who supported the project and helped us through it, and he’s always welcomed putting it up there, and we wanted an open space so everyone could see it,” Mamaril said.