You are at:Home»Current in Carmel»Walking Waffle Company starts new chapter

What started off as Carmel residents Stephanie and husband Mark Lewis selling their waffles at the Carmel Farmers Market for nine years has evolved into a full-blown business. 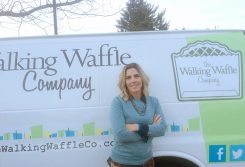 The Walking Waffle Company now has a spot in Circle Centre Mall’s food court, which opened Oct. 29. It is open during mall hours. They also opened a kiosk to try out selling waffles at Indiana Pacers home games in November between sections 11 and 12.

“It was meant to give us something fun for us and the kids to do at the farmers market,” Stephanie said of the original intent. “Our kids have been involved and grown up in the market. It’s turned into something more fun.”

The children are daughters Shelby, 20, Lydia, 19, Peyton, 14 and son Quinn, 12. The business was originally called Three Sisters and Him because of three daughters and a son, but changed so the business’ purpose was more recognizable.

“They all know the process we go through to make the dough and how to run the waffle stand,” Stephanie said. “They’ve even run it themselves when my husband and I have gone away for a weekend. They’ve been hands-on with the whole thing.”

“It’s a little scary and overwhelming,” Stephanie said. “For nine years, people have asked us when we are doing this or that. I always laughed.”

The waffles are prepared in a commercial kitchen space they have in Carmel and then transported in vans.

Stephanie works as an accounting assistant for Case Design/Remodeling in Carmel and Mark has his own epoxy flooring business.

“There is definitely a learning curve with the Circle Centre,” Stephanie said. “We’re having a lot of people that have tried our product that never have before. We’ve had great positive feedback so far.”

“We are looking to add more savory items, as far as types and toppings of waffles,” Stephanie said.