You are at:Home»Current in Zionsville»Tree at Akard True Value honors veterans’ service 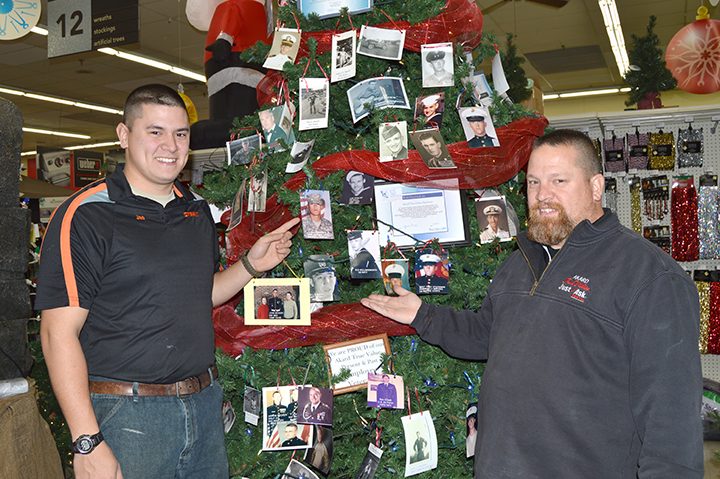 Akard True Value in the Boone Village Shopping Center is celebrating veterans and the holiday season in a unique way.

Each year its employees decorate a 12-foot Christmas tree with photos of those who have served or are serving in the military. Guests bring in photos of loved ones to leave on the tree.

“It’s kind of a cool thing that happens during the holidays because everybody feels busy in the hustle and bustle. We take time to honor the veterans with the tree,” said Leigh Ann Akard, third-generation family business partner at Akard True Value.

The tradition began with a photography store in the shopping center.

“There used to be a place here called Village Photo, and he had 8 by 10 photos of veterans. They did a tribute wall down at Lions Park during the fall festival,” said Joe Hollingsworth, an employee at Akard True Value. “We thought it would be a good idea to put them on a tree that we used to put in the corner here on the plaza, but we changed our minds because it wasn’t a great idea due to weather. We decided for that one year we would put them on a 12-foot tree in the store that we had that we couldn’t sell anymore. It was really cool.”

Shoppers would come in and inquire if they could put their own family’s photos on the tree.

“The tree started getting pretty full. Then we noticed that photos were being moved around on the tree. People were coming in and admiring the tree, but also moving the pictures around so they could see their loved ones. We would see someone standing there admiring the pictures and we would go up and talk to them about it,” Hollingsworth said. “They’d say they love coming in to the store because it’s the one time of year they actually get to see their loved ones who were deceased or active duty. It’s to the point now where the tree is pretty packed full.”

Akard True Value will collect photos through Christmas. Photos will be kept to use in later years. For more, visit akardtruevalue.com.