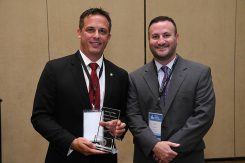 When Steve Johnson received the American College of Healthcare Executives Regent Award, he was shocked.

The Fishers resident has been the chief operating officer of the Indiana Donor Network for three years, and typically the award goes to doctors or individuals from a traditional hospital setting.

“It’s a very humbling award, and I’m excited to be honored with it, but I think it’s more of a reflection of the organization and the people I’m surrounded by and work with,” Johnson said. “It’s really been amazing being associated with this organization and see it grow its mission and the positive rhetoric that it’s created around donation and transplantation.”

ACHE Regent Award recipients are recognized on experience in the field, leadership ability, innovative and creative management and more.

“That dynamic is starting to change. Steve is unique in not working with traditional hospital, per se. He’s not a physician,” said Kit Werbe, media relations specialist for the Indiana Donor Network. “A lot of physicians win this award. On a national scale we feel confident that Steve is one of the very few, if not the first, to win the award in the donation and transplantation field.”

Johnson has experience with air medical and critical care transport. He began his career in New Mexico. He developed an air ambulance company dedicating care to underserved communities in New Mexico and Texas.

In addition to being the COO of Indiana Donor Network, Johnson is the president of Donate Life Indiana, the state affiliate for Donate Life America.

Indiana Donor Network is one of 58 designated organ recovery organizations in the U.S.. It oversees and coordinates organ, eye and tissue donations across the state.