You are at:Home»Current in Fishers»Coffee to Water: Nonprofit raises money for wells domestically and internationally 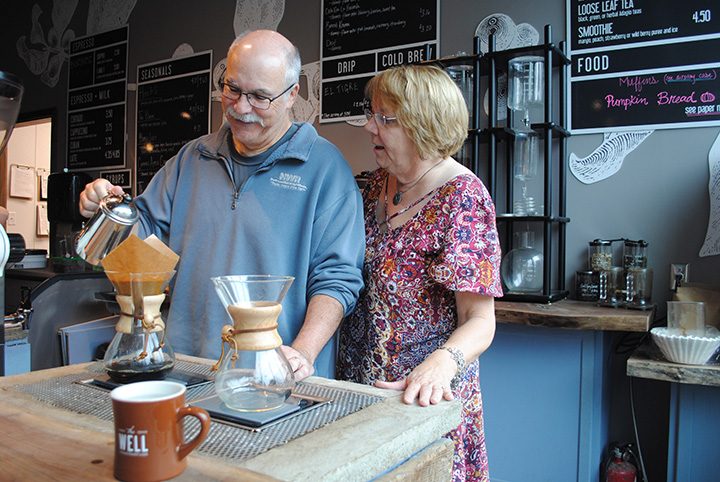 It’s late morning on a weekday, but The Well Coffeehouse Fishers has no open tables. Single patrons fill the barstools placed under a map of Africa. Families converse at wood tables made by ex-convicts, and the conference rooms – with tables showcasing coffee beans and photos of children in Africa – are both full. The nonprofit coffeehouse has been open approximately two months and has become one of the top spots to meet or work in Fishers.

Debbie and Tony Zancanaro were both physicians and unsure how to spend their time during retirement.  Since they wanted invest time in a good cause, and since Debbie had been drinking coffee since she was 5 years old, The Well Coffeehouse offered a sound solution. 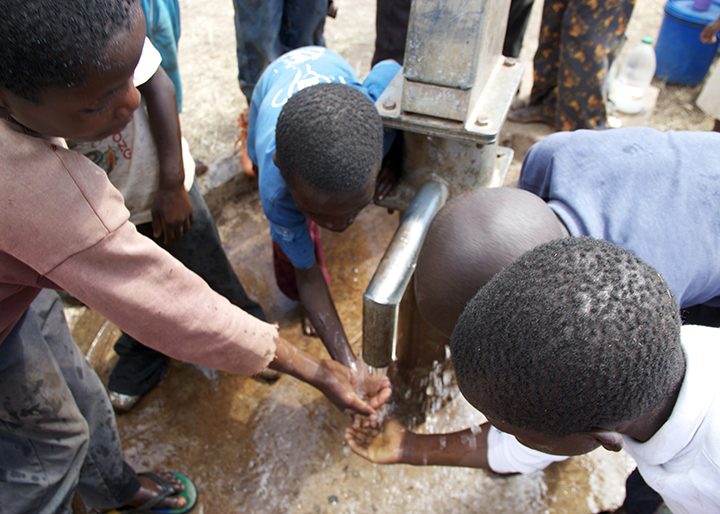 The Well Coffeehouse Fishers turns its profits into wells in Africa and other needy areas. (Submitted photo)

Rob Touchstone and Chris Sober began the nonprofit coffeehouse in Nashville, Tenn., four years ago. The Zancanaros reached out and brought the coffeehouse to its first Indiana location in Fishers, and the couple opened The Well eight weeks ago. They served on the board of directors for the Nashville location for approximately two years before starting their own location.

“We didn’t look at a lot of different sites, but we discussed a lot in our mind,” Tony said. “We thought about being close to a college campus, so we thought about Broad Ripple, Carmel, IUPUI, Butler and Fishers. We have a daughter who lives a couple miles away from here, and we were in downtown Fishers one night and looked around and got attracted to the Depot and the Switch. When we contacted them, both people sai they didn’t have any space available.”

The Edge, at the corner of 116th Street and Lantern Road, did have a spot available, and the Carmel couple found the perfect location.

“We thought it would be a great place since residents live above and all the foot traffic,” Tony said.

The Well founders warned the Zancanaros that they probably wouldn’t be able to make a profit for four to six months. It’s only been eight weeks, and The Well in Fishers has made enough profit to supply water to a Navajo reservation home on the New Mexico-Arizona border by burying water cisterns 1,200 feet below the ground. The water supply system for one family costs $1,300. It was all raised by The Well in Fishers.

“What happens with The Well is there are organizations we work with that dig these wells that identify a need,” Debbie said. “The Well Coffeehouse is not digging wells. It’s just funding the digging of wells. It’s done through second party, such as Christian Relief Fund, Living Water, Blood Water, Mocha Club and Dig Deep.”

The Well stays busy throughout the mornings and early afternoons, and another rush comes when kids leave school for the day. Sometimes, crowds spill into the lobby. Two conference rooms are available for rent through the purchase of gift cards. The first hour of conference room use is purchased by a $40 gift card, and every consecutive hour is rented by purchasing a $20 gift card. There also are plenty of tables, barstool spots and a lobby.

Overall, The Well has built 13 wells in four years, all of which have been in Africa. 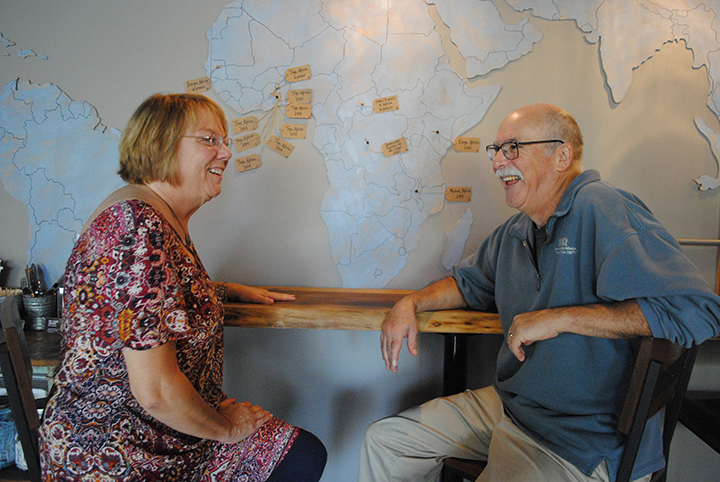 Tony and Debbie Zancanaro converse in front of a map of Africa depicting all the wells that The Well has funded. (Photo by Anna Skinner)

More about The Well Coffeehouse Fishers

The Zancanaros’ favorite coffee: The Cuban, which is made with espresso and sweetened condensed milk.

Where wells have been built:  Navajo reservation on New Mexico/Arizona border.