You are at:Home»Current in Zionsville»Changes to 96th Street, Zionsville Road aim to ease traffic flow

In March, changes will be coming to the intersection of 96th Street and Zionsville Road. 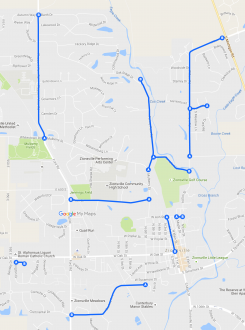 Road work is under way in several areas around town. (Map data ©2015 Google)

Through lanes will be added north and south between Zionsville Road and the next signal at Technology Drive that approaches to the intersection.

“This is the first project of many in the near future hopefully to improve traffic flow,” said Lance Lantz, superintendent of Zionsville’s Street and Stormwater Dept.

The county line is divided at 96th Street, so any road and traffic issues south of 96th  Street fall under the jurisdiction of Marion County.

“What we’re really trying to do is spur Indianapolis on to get some added capacity south of 96th Street,” he said. “We’re looking to them to feel the pressure to add some capacity and additional lanes down there. As far as what we can do in the intersection we’re adding some capacity.”

Bike lanes and sidewalks will be added to the approach of the intersection with modernized traffic signals. The east/west alignment will be corrected. Each of the four legs approaching that intersection will be reconstructed.

Utility relocation is scheduled to occur during the winter months, and it’s expected that the project will be completed in August 2017.