You are at:Home»Current in Carmel»Carmel Community»Carmel’s Joe Hughes joins legends in St. Francis hall of fame

Carmel resident Joe Hughes will join a pair of legends in his high school hall of fame. 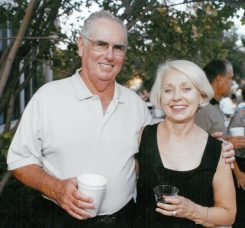 Joe Hughes and his wife, Susan, have been married 61 years. (Submitted photo)

Hughes, a long-time Carmel resident who started Carquest Auto Parts with two other partners, will be inducted into the St. Francis Preparatory School Athletic Hall of Fame in March 2017. Hughes, a 1948 St. Francis graduate, is going in as part of the school’s second induction class.  Former Major League Baseball player and manager Joe Torre and legendary Green Bay Packers coach Vince Lombardi were inducted in the inaugural class.

“There were 300 students when I went there, but it’s now the biggest (non-diocesan) Catholic high school in the country,” Hughes said.

“We were sitting behind the dugout and Ted Williams comes up and says, ‘Hi, Frank,’” Hughes said. “I about died. After the game, I met Ted Williams and we went out to dinner. That sold me on St. John’s.”

Hughes led the freshman team in scoring but had some issues with the coaching staff and classes. He decided to sit out a year, doing iron work and working on his father’s bar in Brooklyn. McGuire recommended Hughes to University of Denver coach Hoyt Brawner.

“I didn’t know this until later, but McGuire told the coach at Denver if I didn’t start by the third game he would pay for my scholarship,” Hughes said. “At St. John’s I was more of a passer and defense, but there I was more of a shooter.”

Hughes was drafted following his junior season by the Syracuse Nationals (now Philadelphia 76ers) in 1953. He said most NBA players were making $4,000 and $6,000 a year. Players made more money by playing for the National Industrial Basketball League. He played two seasons with the Akron Goodyear Wingfoots. He stayed five more years working for Goodyear. He was transferred to Indianapolis in the late 1950s.

“I was one of the top 10 salesmen in the country for two years out of the five,” Hughes said.

Hughes started Carquest with two friends in 1972. All three were in the auto parts business. His other partners were in New York and North Carolina. They decided to form under one name for advertising purposes.

“We thought it would serve the purpose for the three of us, but we ended up in every state and in Canada and then Mexico,” he said. “We ended up between 2,700 and 3,000 stores.”

Hughes, who still owns shares, went on a consulting contract that runs out when he’s 90.

Hughes and his wife, Susan, have five children, and he adopted six of his sister’s children.