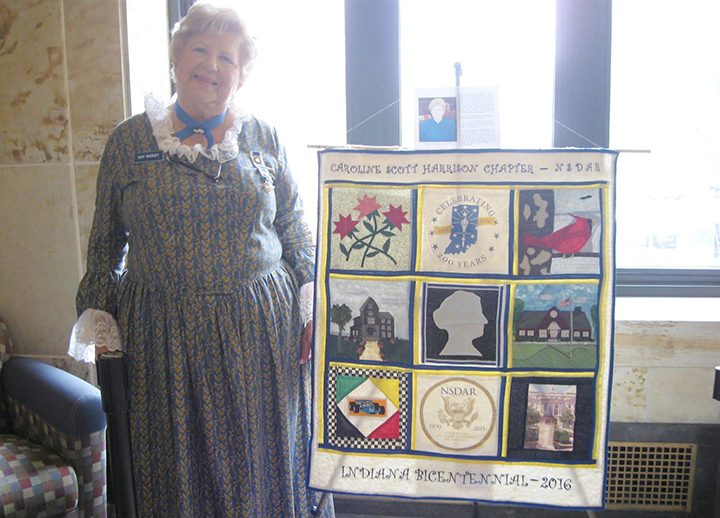 Kathryn Nickey of Carmel is a retired Air Force lieutenant colonel, involved with the Caroline Scott Harrison Chapter of the National Daughters of the American Revolution and a quilter.

To celebrate Indiana’s bicentennial, she created a quilt honoring the Hoosier state and its history. The quilt was on display at the Indiana Statehouse during the re-dedication of the National Road Monument Sept. 9 and again on Oct. 15 for the bicentennial signature event, Hoosier Homecoming.

Nickey began working on the bicentennial quilt in February and completed it in mid-August.

“I just thought it would be something special to do during the bicentennial since it is such a rare event for people to be able to participate in,” Nickey said.

Nickey began quilting in the 1980s. At first, she made baby quilts for the births of her nephews and nieces, and then moved onto making quilts for charities, birthdays and graduations.

The quilt was designed by Nickey and honors the state of Indiana, the Caroline Scott Harrison Chapter of the National Daughters of the American Revolution and 2016 Indianapolis events.

Row one of the quilt features the peony, Indiana’s state flower, the Indiana bicentennial flag and the Indiana state bird, the cardinal. Row two features the first Caroline Scott Harrison Chapter House, a silhouette representing the chapter’s namesake, and the current chapter house of the Daughters of the American Revolution on Illinois Street in Indianapolis. Row three features the 100th running of the Indianapolis 500, the 126th anniversary of the National Daughters of the American Revolution Continental Congress in June 2016 and the 100th anniversary of the chapter’s gift of the National Road Monument.