You are at:Home»Current in Carmel»Carmel Community»Barrington of Carmel honors 50 veterans

The Barrington of Carmel held a Salute to Our Veterans ceremony Nov. 7 to honor its approximately 50 veterans in its community. 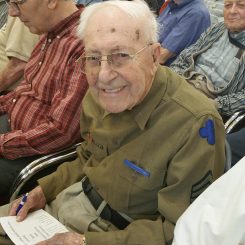 Charlie Schweitzer, a 99-year-old veteran who served in Gen. George S. Patton’s Seventh Army, was the oldest veteran to be honored during the ceremony at the Barrington of Carmel. (Photo by Heather Collins)

The program included a processional, posting of the colors by the Carmel VFW #10003, the pledge of allegiance led by Judy Doeppers and the national anthem performed by Rev. Karen Reeve and Jeannette Ritchhart. The program also included a roll call of each of the veterans residing at the Barrington of Carmel. Upon their name being called, each veteran listed their name, rank, branch of service and duration of service.

Charlie Schweitzer was the oldest veteran to be honored at the ceremony. He is a 99-year-old World War II veteran who served in General George S. Patton’s Seventh Army. Schweitzer wore his original uniform for the ceremony.

Following roll call, two veterans and Barrington of Carmel residents, Bill Bugher and Chuck Jordan spoke to the group about their recent Honor Flight experience. Honor Flight is a nonprofit organization that provides free transportation for veterans to visit memorials in Washington, D.C.

“It was the most well-organized event that I’ve ever participated in,” Jordan said.

Upon arrival of the Honor Flight, Bugher and Jordan were greeted by an army band and hundreds of people thanking them for their service. Both men encouraged veterans to experience the Honor Flight.

During the ceremony, Vic Bruchan, a Korean War veteran and chairman of the resident council, presented several veterans with a certificate representing their Bricks of Honor. The Bricks of Honor are engraved with the veteran’s information and placed around the Soldiers and Sailors Monument on Monument Circle. The Barrington of Carmel has purchased 65 bricks in the last year to help memorialize veteran residents.

Closing comments were provided by Joe Benson, executive director of the Barrington of Carmel, who thanked the veterans for their service.