You are at:Home»Current in Zionsville»Lewellyn Technology details Zionsville expansion

Lewellyn Technology has announced an expansion to invest $1.5 million into its 5,000-square-foot headquarters in Zionsville. The expansion will add up to 30 new jobs by 2021 and 3,000 square feet to be used for offices, with roughly a third of that new space to be used as a training center. 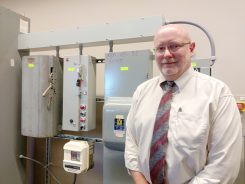 The company works with a variety of businesses and offices to put electrical safety measures and procedures in place. Clients range from research facilities, universities, property management companies and military bases.

“Pretty much anything electrical safety we can do,” CFO Roger Black said.

The company also works with combustible dust, analyzing it to meet National Fire Protection Safety standards, with many of their employees formerly having worked for OSHA.

“We’re electrical safety A to Z and combustible dust A to Z,” he said.

Black has heard the demand from clients to have classroom training where they can meet the electrical safety training required every three years.

“We’re looking to have more training areas where we can train our employees when we hire them as well as hold (electrical safety training) classes here,” Black said.

The company also plans to expand into “lock out, tag out” procedures, which prevent accidental restarting of equipment that has been turned off for repair or service.

Lewellyn Technology received hiring credits from the state and the town of Zionsville and expects to receive tax incentives from Boone County for equipment purchases.

Neighboring MOBI also recently announced an expansion, and Black said the proximity and access to I-465 makes the area appealing.

“We like this corner of the world,” he said. “It’s a little gem here that no one necessarily knows about.”