You are at:Home»Current in Carmel»Carmel Community»Carmel man dies in early morning wreck on I-65 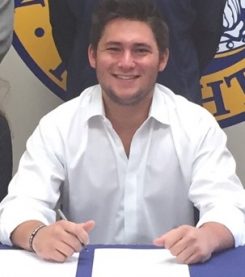 A Marian University baseball player who lived in Carmel is dead after the car he was driving had a head-on collision with a semi-tractor trailer shortly after 1 a.m. Nov. 10.

Investigators believe that Eric Petruzzi, 20, was driving northbound in the southbound lanes of I-65 near 21st St. when his 2012 Nissan collided with a semi driven by Petr Kilimmik of Virginia. Petruzzi was pronounced dead at the scene

Kilimmik suffered minor injuries. He submitted to a test for alcohol, with results pending, but investigators said they have no reason to believe he was driving under the influence of drugs or alcohol. Petruzzi’s blood will also be tested for alcohol and drugs, but results are not expected for weeks.

Petruzzi was a 2014 graduate of Brebeuf Jesuit Preparatory School and a sophomore at Marian University majoring in business management.

“The Marian University community was deeply saddened to learn that one of our students, Eric Petruzzi, was tragically killed in a car crash early this morning,” said Daniel J. Elsener, president of Marian University, in a statement. “Our most heartfelt condolences and prayers go out to Eric’s family and friends, as well as his coaches and professors. The university is providing grief counseling on campus to all students, staff and faculty.”