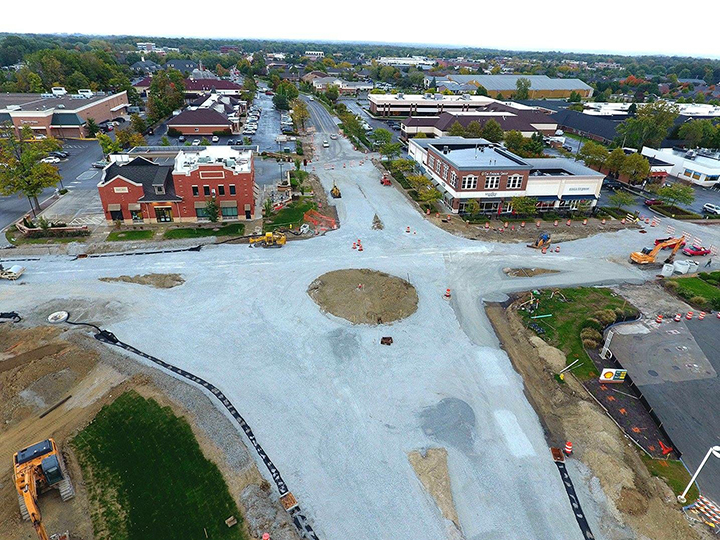 The roundabout at Range Line Road and Carmel Drive is set to open Nov. 17. (Submitted photo)

The first few weeks in November will be big for road openings in Carmel.

Carmel Mayor Jim Brainard said a number of roundabouts will be complete and the roads will be opened. Much of the attention will be on Range Line Road and Carmel Drive, which is set to reopen on Nov. 17 and will be the city’s 100th roundabout. A celebration organized by the city will take place from 4 to 7 p.m. that day, with festivities expected to include a ribbon cutting, party and special guests.

“It’s very exciting,” Brainard said. “We know this has been hard on people, and we thank everyone for their patience.”

Brainard said he expects the Carey Road and Hawthorne Drive roundabout to be complete before Veterans Day, with the 116th Street and Gray Road roundabout complete the next week, making them the 98th and 99th roundabouts, respectively.

“We have certainly felt the effect,” said Steve Ward, owner of Nippers Grill & Bar, 1772 E. 116th Street. “A number of people have told us they won’t even try to get to us from the north, or downtown Carmel in particular, because of the construction. We can only imagine the detrimental effect on 116th Street businesses once again when they get to the 116th and Range Line construction.”

Owners at Body Mind and Core Yoga Studio, 1344 S. Range Line Road, said their sales are down and they had to cut back on staff as a result.

“We are not looking forward to the next roundabout at 116th and Range Line,” owner Natalie Perez Hayden said.

Brainard said the road closure would have been worse if the city didn’t completely close the roads, because construction would have taken longer.

“Partial road closures take four to five times as long as full closures and impact businesses in that customers tend to change their habits and find new places to shop after that much time,” he said. “Customers avoid construction and partial closures simply make the problem last longer as well as cost the taxpayers additional money.”

Brainard said if the city didn’t invest in roundabout construction, traffic backups in the future would harm business owners.

“These improvements will allow for continued growth in this area, which will in return result in higher sales for years into the future – growth that would not have been possible without the intersection improvements,” he said.