It’s about love, dreams and finding your true self. 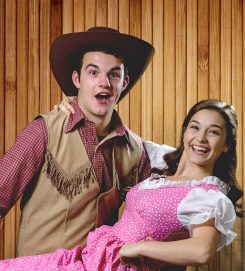 Weston LeCrone as Will and Cynthia Kaufman as Ado Annie are part of the ZCHS production of “Oklahoma.” (Submitted photo)

“Oklahoma,” the Rogers and Hammerstein musical that premiered on Broadway in 1943, will be performed at Zionsville High School from Nov.  17 to 19 for four performances.

“Even though we have conflicts,” said senior Claire Eugenio, who plays innocent farm girl Laurey, “love conquers everything, and at the end of the day that’s what helps us coexist peacefully.”

Director Mikayla Koharchik said the show follows the characters as they realize their dreams.

“Dreams aren’t necessarily what you have, but it’s the people around you that make it a possibility,” she said.

“We’ve done two pretty current pieces,” she said. “There’s a lot to be said about a classic piece.”

To ensure the theme in the traditional musical is still relevant for today’s audience, Koharchik has made some slight adaptations.

“One of the things we’re doing is giving Laurey a more independent character so she’s not a typical ingénue,” she said.

But the musical is still appropriate for all ages.

“The way it was created was as a family production, and it’s a classic,” Eugenio said.

“I think that people know the story,” said junior Weston LeCrone, who plays cowboy Will Parker. “And people don’t know the deeper meaning behind (the characters).”

LeCrone relates it to seeing people in the hallways at school but not really knowing them on a deeper level.

“Once you get to know them, you get to know who they truly are. What ‘Oklahoma’ is about is finding who you truly are,” LeCrone said. “The audience should walk away learning something more than what they came in thinking.”

Other than the directorial staff, the production is run entirely by roughly 80 students. Tickets are available at zvilleperformingarts.org/events.