You are at:Home»Current in Fishers»Running across the nation: Septuagenarian to complete marathon in all 50 states 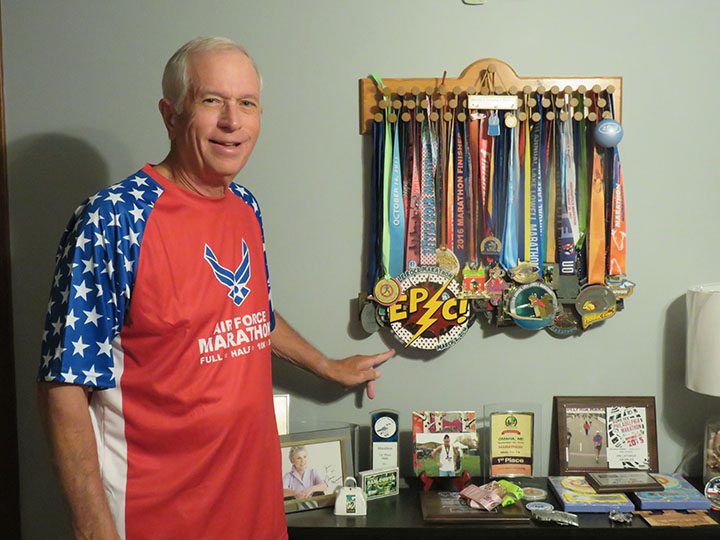 Jim Lathrop has a display case with all of the medals he has received from running marathons. (Submitted photo)

Jim Lathrop is 71-years-old and suffered a stroke last year, but he won’t let that get in the way of his goal.

Next week, Lathrop will run a marathon in North Carolina, the last state on his to-do list to complete a marathon in all 50 states. 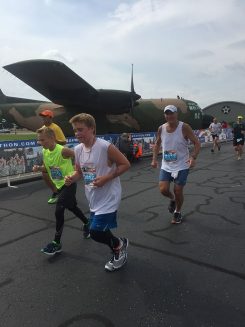 “Running really saved my life. It was there because it was a difficult time in my life,  and I go, ‘Hey, I’m still competitive. I can still beat a lot of young people, and I love it,’” Lathrop said. “It gives you such an awesome feeling to run a marathon or a half marathon or just a 5k with people still behind you. It’s just such an awesome feeling. It’s in your blood. I’ve always been competitive, whether it’s work or play. Running seemed like a natural thing to do, so being retired I was like,  ‘Why not?’”

Running followed Lathrop through his first wife’s death and  his remarriage. He runs with his daughters, who live in Fishers, and his grandsons. Lathrop’s three daughters, Jenny Brunt, Christina Harpring and Julie Rowland, ran the Alaska marathon with Lathrop to fundraise for lymphoma, which their mother died of.

“A marathon is a journey. It’s not a sprint. There’s been a lot of wonderful things that have happened along the way. Unfortunately, I lost my wife and fortunately remarried to a wonderful woman,” Lathrop said. “Yes, I suffered some setbacks – three back surgeries, a stroke, and I’ve had to cancel several races because of injuries or things that have occurred. I’ve had a stroke, but I’ve come back. You have to keep going. It may take a while to keep going and get back on your feet, but I’ve tried as hard as I could to do that. I feel very fortunate and very blessed with my life. Running has certainly been a huge part of it.”

Lathrop said that after his North Carolina event Nov. 12, he won’t run any more marathons. However, his wife Bernadette has begun a goal of completing a half marathon in every state, and he said he plans to travel and race with her.

Lathrop has inspired his family with his running, and two of his grandsons, Michael and Conner Brunt of Fishers, are following their in grandfather’s running footsteps.

“I hope if they enjoy the sport, I hope they pick it up and then think about me in later years,” Lathrop said of his grandsons. “I hope that happens. It’s a great sport. It’s good to you, and it keeps you in shape. You meet the best people in running. They’re just all great people.” 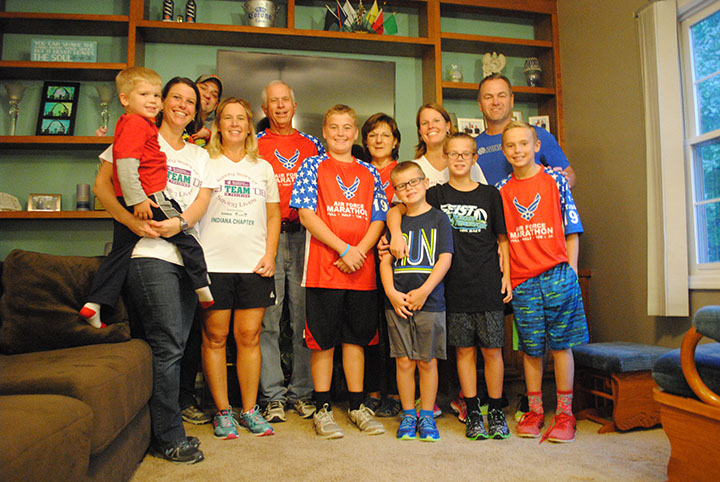 Jim Lathrop (back, center) with his family. His daughters and grandchildren have followed in his footsteps when it comes to running. (Photo by Anna Skinner)

Stroke is no setback

On April 12 of last year, one day after Jim Lathrop’s 70th birthday and completion of a marathon in Idaho, he suffered a stroke en route to Salt Lake City for another marathon the following week. Although he had to sit out his next few races, Lathrop suffered no long-term effects from the stroke. Since then, he has completed 14 more marathons. Nov. 12 in North Carolina will be his last state before he reaches his goal of running a marathon in all 50 states.

“This will be my last marathon,” he said. “I think God had spoken to me and said,  ‘Jim, it’s time.’ I will continue running the half marathons and continue training just as hard as I did before. My wife will have 16 half marathons to go to complete her 50.”