You are at:Home»Current in Carmel»Music & Memory program benefits Barrington of Carmel residents 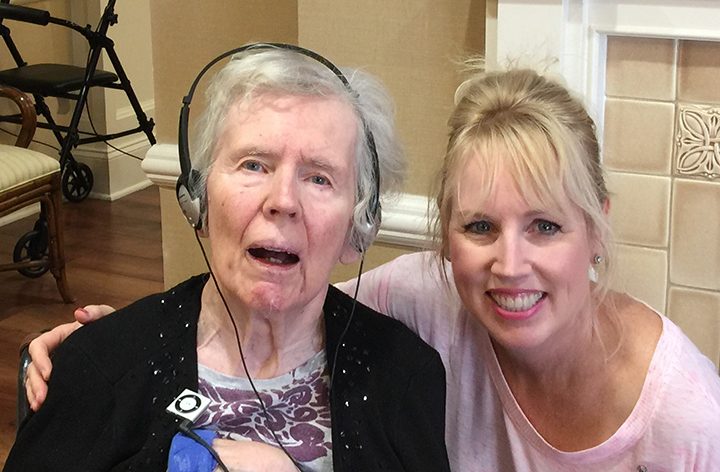 Music has always been a big part of The Barrington of Carmel resident’s life. Best, 86, majored in music at the Jordan School of Music at Butler University and was an organist at Irvington United Methodist Church in Indianapolis and a music teacher at Heritage Christian School.

Best was diagnosed with Lewy body dementia five years ago, a condition that can resemble Parkinson’s or Alzheimer’s disease and is sometimes difficult to diagnose.

“She does wake up, and she is more aware,” said Christine Best Perkins, her daughter who lives in Westfield. “She’ll start tapping to the music. She interacts more with me even when she is wearing the headphones. It’s nice because a lot of time when I come she’s almost in a catatonic state or she has her eyes closed. The music helps her come out of it more. She’s more responsive.”

Perkins said her mother told her years ago that she didn’t want to lose her music.

“She had recorded herself playing hymns and other songs,” Perkins said. “I put that on the iPod and she is listening to herself play the piano.”

Perkins said it is comforting because the music is something both she and her mother can enjoy.

“She doesn’t speak, but her eyes tell me she knows who I am,” Perkins said. “She lights up when I come see her.”

“When residents feel overwhelmed, music puts them back in that place where they have a sense of self,” Stephens said. “The program has served as a breakthrough to connect to residents living with memory loss, and each of the 25 residents involved in Music & Memory uses the program in different ways. For example, if a resident finds music soothing during meal times, it helps with nutrition. Even if the residents are not verbally communicating, music enables us to shift a mood or help manage agitation or stress.”