Carmel High School senior Blaine McBroom is relishing his role as the ultimate con man in “The Sting.” 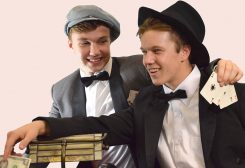 “(Henry) Gondorff organizes the whole thing, so it feels cool to be the puppet master behind the whole operation,” McBroom said. “To play that role has been difficult to understand his different emotions and how he feels about the fact this will be his last con before he retires.”

The play is set in Chicago in 1936. Paul Newman played Gandorff and Robert Redford played Johnny Hooker in the 1973 movie, which won an Academy Award for best picture.

“I think it appeals to a very large audience,” said McBroom, who will attend Columbia College Chicago to pursue comedic acting, writing and improv. “I like the twists and how everything comes together at the end.”

“He’s a young and scrappy guy,” Nordeen said. “He’s a pupil under Gondorff, and I’m learning the ways of the con under him. For me, it’s easy to portray a younger person just getting his way in the world. My first four shows I was in the ensemble, and now I’m one of the leads.”

Senior Chuck Burton plays Doyle Lonnegan, the gangster who is being conned.

“It’s one of the bigger roles I’ve had,” said Burton, in his 10th CHS production. “He’s a menacing character, not something I’ve got to do before. I’m having a lot of fun.”

Director Jim Peterson said the best part of the production is being able to use so many students.

“We have about 42 in the cast and even more on crew, so there are a lot of kids involved, which I love,” Peterson said. “And as an added bonus, I’ve been able to introduce an entirely new generation to such a great story. Most of the parents love the film, so I’m hoping that translates to a great audience.

Tickets are $10 at the door or online at ticketracker.com/store/events/279.