You are at:Home»Current in Zionsville»Born to sing: ZCHS sophomore Maeta Hall ready to make her mark on national music scene 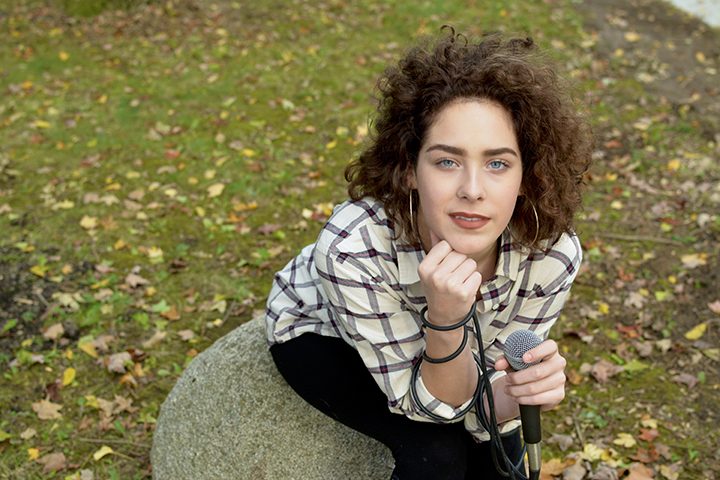 Maeta Hall of Zionsville recently released her first single. She has dreamed of being a singing star for as long as she can remember. (Photo by Lisa Price)

Maeta Hall has wanted to be a singing star as long as she can remember.

Her mother, Tobie Hall, said that ambition is clearly displayed in their home movies.

“She’d always say, ‘Introducing Maeta Hall,’ and then she would sing,” Tobie said. “In every home video, she has a microphone and she’s singing. It’s kind of a family joke that she was destined to be a singer.”

Now the Zionsville Community High School sophomore is moving closer to her dream with the release of her first single with the help of her manager, Willie “Bum Bum” Baker, who has also worked with Beyonce and Pink.

“It’s mostly pop mixed with R&B (rhythm and blues),” Hall said. “I used to hate pop, but I’m getting into it. I thought pop was just what’s out now. But I didn’t realize there are so many different kinds of pop. I thought I was going to have to change my voice and change who I am, but I didn’t.”

Hall made the switch to more pop on the advice of her management team.

“She was adamant she was singing R&B, but they would laugh and say, ‘You have to do pop, honey,’” Tobie said. “They were saying your second album you can make it more what you want. They take the songs and put them out one at a time because they have to decide what the fans want.”

Hall released a single, “Headlights,” in September. The song, which was written by Sam August and Hall, is on iTunes and Spotify.

Hall records at Baker’s house in Atlanta. He is co-owner of the record label Delab Music and has been nominated for a Grammy Award.

“We write together and develop her sound and direction,” Baker said. “We’re getting her ready for the social media push. She’s continued to develop herself. She’s a great musician.”

Baker said he would still describe her style as more R&B than pop.

“At 16, she is very focused,” Baker said. “We develop her, but she said this is what I want to sing about. This is my sound. This is what girls my age like. We take guidance from her and help to produce.”

Baker said a friend from his North Central High School days had called to tell him about Hall three years ago.

“Then sent me a video, and it just blew me away,” Baker said. “We immediately got her down to Atlanta and started to work with her.”

Hall, who started playing the piano when she was 5 years old and began singing at age 8, did interviews at Radio Disney and J-14 Magazine in Los Angeles in September to promote her songs. She went to New York City for an interview with YSBnow, a print and digital publication for teens.

Tobie said her daughter was approached about doing a reality show, but eventually turned it down because of a restrictive contract.

Hall auditioned for “America’s Got Talent” in Indianapolis about two years ago.

“(Her manager) wanted her to do it just for experience,” Tobie said.

Hall said it wasn’t a good fit, and that she is most suited for an audition for “The Voice.”

“I think I would be good at that one,” said Hall, whose performances can be found on her website (maetasworld.com) and YouTube.

Personal: Maeta is named for her great-grandmother. “People call me weird things,” Hall said of the pronunciation (correct: MAY-ta). Hall moved to Zionsville from Pike Township this summer. She took online classes during the 2015-16 school year but prefers the structure of school sessions. Brother, Jonathon, 15, plays drums and also is a sophomore. “We’re best friends, but he won’t admit it,” Hall said. Her father, John, plays the drums, too, and is a ZCHS graduate. Tobie grew up in Zionsville and graduated from Brebeuf Jesuit Preparatory School.