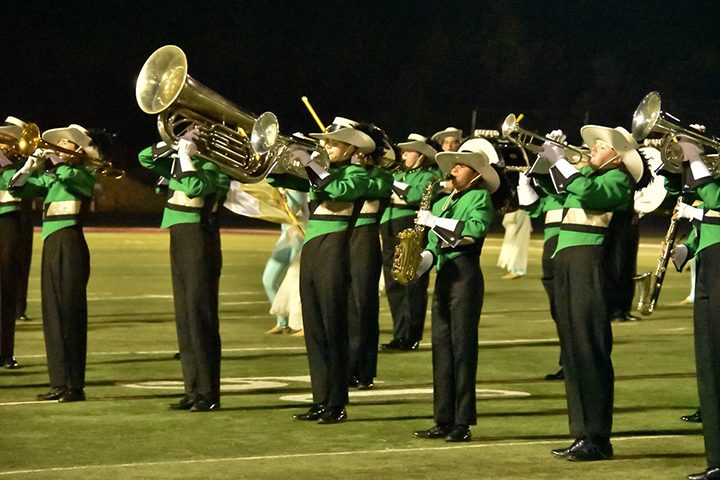 The ZCHS Marching Eagles perform its title-winning show, “Into the Light.” (Submitted photo)

The championship was in the ISSMA Scholastic A division, which is determined through a combination of school size and band size. The band captured the honor in the Oct. 22 competition at Lawrence Central High School in Indianapolis. This is the first championship for the marching band, which ZCHS Director of Bands Tom Landrum said provided a wonderful reward for all of the hard work put in by everyone involved.

“This is easily the best show we’ve ever had, awards notwithstanding,” Stucky said. “We had some staffing changes this year, including a new color guard director. While some bands would deal with this kind of stuff badly, we dealt with it masterfully.”

A strong rehearsal routine was key.

“We kept the energy going throughout the season, and we were able to score our highest score in school history,” Stucky said.

Other drum majors were Theresa Bottorff and Sam Ferguson.

Landrum said the show ends with one performer making a graceful exit from the performance area through large golden gates. The band created a special effect with fog and a bright light coming from the other side of the gates, which brought the show to a close with someone going “Into the Light,” the performance title.

“This was a very emotional and perfect ending of the show for many of us, and apparently the judges appreciated it as well,” said Landrum, in his 17th year as ZCHS.

As a state champion, Zionsville put on an exhibition performance Oct. 29 at Lucas Oil Stadium.

“This achievement took a lot of hard work and dedication by everyone involved,” Landrum said.

“It’s been kind of a crazy season,” Donoho said. “People have gotten injured, people have moved out of state, new people have joined to fill in those spots. It could have all been a train wreck, but everyone worked so hard and that hard work paid off.”

Donoho will always remember walking off the field after the band’s performance in the state finals.

“We were all standing around hugging and a lot of us were crying, and I had this moment where I realized that I didn’t care if we never got to do the show again because we could not have asked for a better show to be our last,” Donoho said.

“I have never heard an audience cheer that loud for something that I was doing,” Lehman said. “It was a great feeling that I will never forget.”