You are at:Home»Current in Carmel»Carmel Community»Range Line Road, Carmel Drive could be city’s 100th roundabout 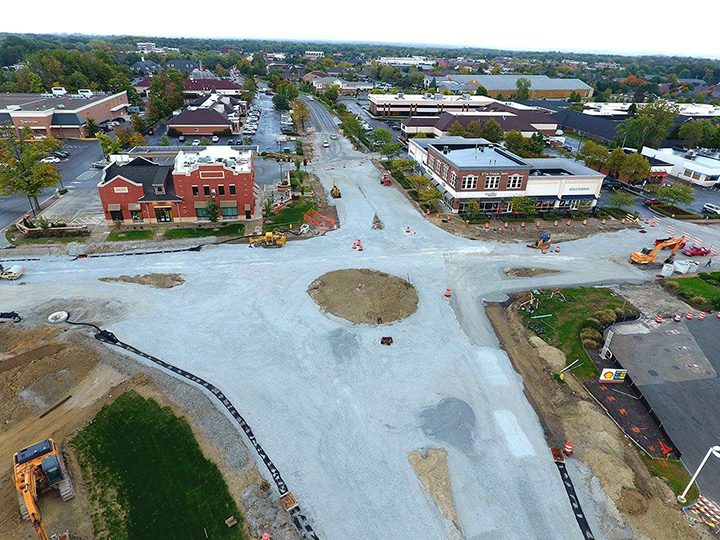 Work continues at Range Line Road and Carmel Drive, which could be the city’s 100th roundabout. (Submitted photo)

Roundabout enthusiasts will be excited to see Carmel become the first U.S. city to enter the “century club.”

Carmel’s 100th roundabout will likely be complete before the end of 2016, and Carmel Mayor Jim Brainard said it looks like it could the intersection of Range Line Road and Carmel Drive in mid-November or early December. Of course, with bad weather or delays due to utility work or other complications, that could change. Originally it was thought the roundabout could be complete before Thanksgiving, but that might not happen.

Brainard said his marketing team is planning a big celebration when the 100th roundabout is complete, and it’ll be more than just a ribbon cutting.

“We’re looking to see which one it might be,” Brainard said. “It’ll be a party we think.”

Brainard said Carey Road and Hawthorne Drive might be roundabout No. 98 and Gray Road and 116th Street might be No. 99.

A year after being elected to his first term in 1996, Carmel Mayor Jim Brainard saw the construction of the city’s first roundabout at 126th Street and Hazel Dell Parkway on Carmel’s east side. The city grew to more than 40 roundabouts by 2009 and more than 70 of them in 2011.

Sticking with the roundabout spirit, Brainard said the city has bought the U.S. rights to a British calendar that named one of Carmel’s roundabouts as the most beautiful in the world. The roundabout on Horseferry Road, just south of Main Street within the Village of West Clay, earned the title of “International Roundabout of the Year” for 2016 by the UK Roundabout Appreciation Society.

Brainard said hundreds of calendars are being printed to be sold in the All Things Carmel store on Main Street, along with other shops. The price hasn’t been decided yet.

Brainard said he’s happy with the city’s road construction schedule but did note there’s a delay for the construction on 126th Street just east of Range Line Road. He said utility work took five weeks longer than expected and now it doesn’t appear the eastbound lane will be complete this fall as hoped. He said he’s hopeful crews can catch up with good weather, but he admitted that 20 days is a lot of time to make up.