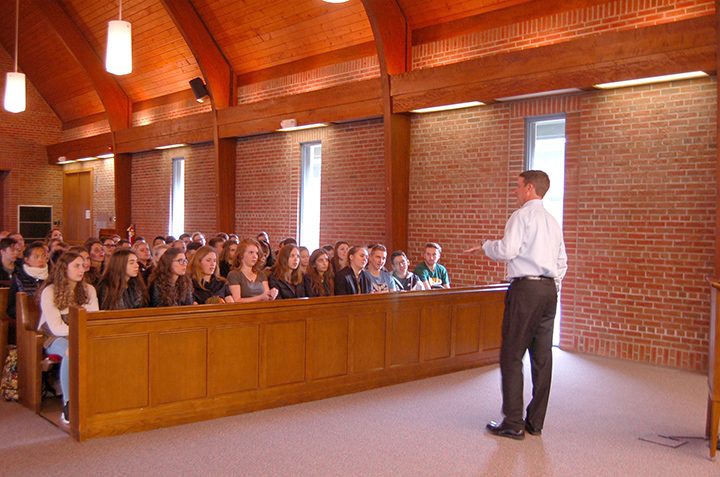 Thirty-five French students are experiencing an American Halloween and election first-hand as they spend two weeks in Zionsville as part of the high school’s exchange program.

On Oct. 31 the students met with Zionsville Mayor Tim Haak, who explained his role in the town government. Prior to their visit to town hall, the students were treated to a scavenger hunt on Main Street, tracking down items such as a knight in shining armor, a white picket fence and a Jack-o-lantern.

Fabrice Robardey, a professor of history at JJ Henner secondary school in Altkirch, France, is among the four faculty members traveling with the students.

Robardey expects this trip will help the students gain “a better understanding of the country from the inside. We learn about the US from the outside, and TV and movies,” he said. “They get to know a different culture from the inside.”

All of the students are part of a foreign language immersion program through which they study social studies, math and physical education.

Robardey said that several students are acting as journalists on this trip, submitting daily articles of their experiences to the local press in Altkirch.

In June, 10 American students taking French at Zionsville Community High School will travel to Altkirch along with principal Tim East and French teacher Amy Conrad. East said they’ve been participating in the program for three years with the same school, with different junior-aged students each time.

“It’s a fresh group each year,” he said.

During their two weeks in Indiana the students will visit Lucas Oil Stadium, the Indiana State Museum and Indiana University.