It starts with a scream. 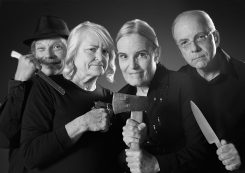 Oakland Civic Theatre will present “Vintage Hitchcock: A Live Radio Play” beginning Nov 4. The play will feature two of Alfred Hitchcock’s earlier films, “The Lodger” and “The 39 Steps.” “Vintage Hitchcock: A Live Radio Play” will pay homage to the 1940s style of radio play productions. The style of the play is similar to National Public Radio’s “Prairie Home Companion.” Live actors will play various characters and recreate different sound effects, which  allows audiences members to feel like they are watching a traditional live radio play in the 1940s.

Marsha Grant, director of “Vintage Hitchcock: A Live Radio Air Play,” said one of the most interesting parts of directing the play was creating all of the sound effects. The cast and crew had to get creative to recreate sounds such as Big Ben, the “cloppity clops” of a donkey, doors slamming and dishes clinking together.

“A lot of it you just have to try and see how it sounds,” Grant said.

For the donkey, cast members used empty coconuts. Grant said part of the fun of watching the show is seeing all of the unusual sound effect props.

The play pays tribute to classic film stars such as Greta Garbo and Lauren Bacall. All cast members will be dressed in traditional 1940s outfits. The play includes vintage commercials for the Bates Motel and North by Northwest Airlines, among others. The play will also feature live jingle singers throughout the show performing in the style of The Andrews Sisters.

“We try to make it as authentic as we can,” Grant said.