You are at:Home»Current in Zionsville»LIDS finishing touches include social media command center at Zionsville headquarters 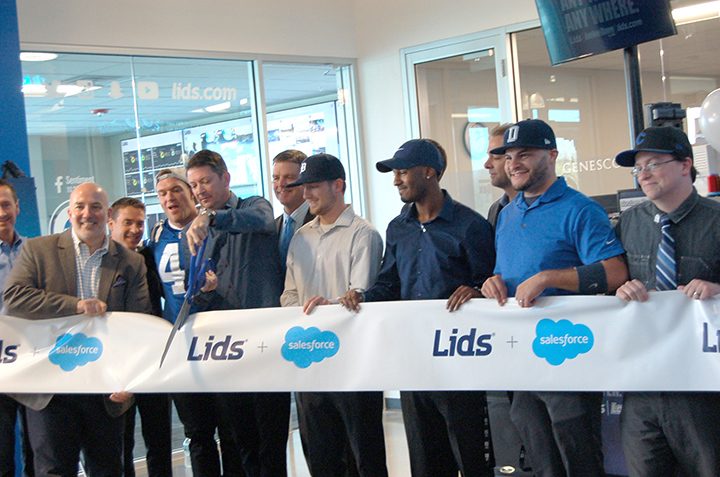 LIDS unveiled a social media and marketing tool Oct. 25 at its Zionsville headquarters, finalizing the details of the 150,000-square-foot office.

Press Box is a digital command center that tracks social media along with demographics, competitive information and the sentiment of sports teams. A small handful of employees monitor the information about 15 hours a day from the headquarters and react through social media.

“You don’t have to have a room like this to be involved in what’s happening in social media,” said Jeff Pearson, LIDS senior vice president of Ecommerce. “But it makes sure that we understand everything that is going on, and it is very visible to the company.”

The social media command center is powered by Salesforce, which generates the analytics of social media.

“The reason for having the Press Box and the social command center is to take advantage of those (social media) opportunities exactly when they happen,” Pearson said. “If you wait 30 seconds, 60 seconds, it’s old news. That’s the power of what the Press Box is going to allow us to do.”

“The Press Box is an opportunity for us to insert ourselves into the conversation around sport,” LIDS President and CEO David Baxter said.

LIDS, which sells officially licensed hats for the NFL, NBA, NHL and MLB, carries the sports theme to their headquarters, which has a sports bar and locker room vibe. Inspirational quotes line the hallways, and a digital scoreboard ticker keeps track of the latest scores and schedules in the lobby. Throughout the building television screens broadcast ESPN, and a downstairs cafeteria is eqiupped for employees to play ping pong, pool, video games or foosball.

“People definitely want to work in a place that is fun and rewarding,” Pearson said. “You’re doing something that is important, but it’s fun and you have fulfillment coming to work. The mix of being able to work hard and being able to play hard and have some fun is important.”

During the behind-the-scenes celebration, LIDS created customizable hats, an option available at 923 of its stores. LIDS is the only company that offers customized stitching  that includes the option to add the official autographs of athletes to a hat.

LIDS employs 400 people at its headquarters and another 8,000 employees throughout the U.S. and Canada at its 1,300 retail locations.