You are at:Home»Current in Zionsville»In control: Flight1 teaches children to soar despite struggles 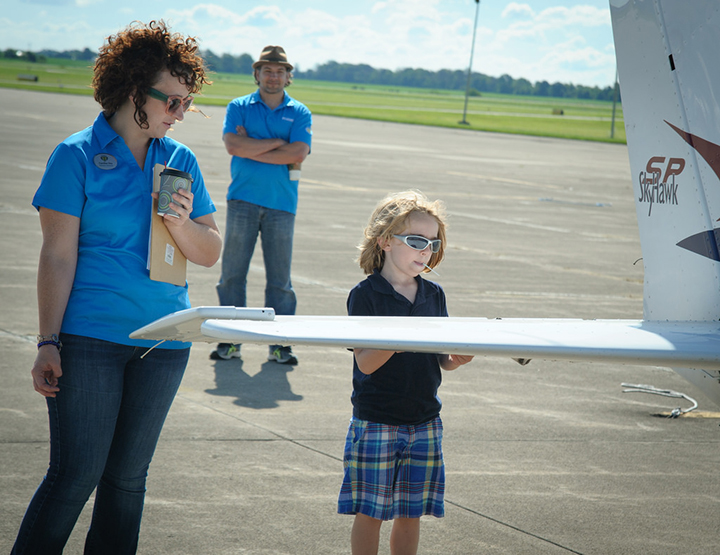 Caroline Hoy was working as a social media contractor when she was asked to post a job opening that caught her eye.

“Good communication skills. Enjoys being with people. Aviation background a plus. I’m reading it and thinking, ‘That’s me!,’” she said. “It was a really special sort of culmination of some of my background in one position.”

In March, the Carmel resident became the first executive director of Flight1, a nonprofit that teaches children facing hardships to fly – literally. During the free three-year program, participants spend time in a simulator before making three flights in a real airplane out of the Indianapolis International Airport in Zionsville or Indianapolis Regional Airport in Greenfield.

“The main point is for them to literally be able to take the controls and feel the confidence of being the decision-maker in their lives,” Hoy said. “There’s just something really special about that sense of control when you are the one piloting the airplane wherever you want it to go. When they get out they just have a spring in their step that is very heartwarming.”

“I never flew a plane before, and I was scared at first. I was also scared when my dad passed away,” he said. “Flight1 gave me a lot of courage when I flew the plane, and that kind of helped me fly with my dad in spirit.”

Hoy feels that she is able to relate to families going through the program because tragedy struck her own family in 2013. Her oldest daughter, Audrey, died suddenly at age 4. Doctors determined she had a common virus that led to viral meningitis and multiple organ failure.

“It was such a shock,” Hoy said, adding that Audrey had been healthy her whole life. “You never expect something like that.”

Now, Hoy reaches out to other families in the midst of difficult times. Flight1 primarily accepts children who are facing health challenges, have an ill family member or have recently suffered the death of a loved one. She enjoys watching the difference a flight can make in their lives, and she’s hoping others will, too.

“I would invite anyone who’s curious about what we do to come to one of our flight events and see firsthand the kids and their faces when they get out of the airplane. It’s something that’s hard to capture in words,” Hoy said. “Once I experienced it, it hit home for me in a very touching way of what it can actually accomplish.”

The nonprofit doesn’t own its own aircraft but rents them at the airports. Hoy anticipates that people volunteering their planes for the program will be “crucial to our next growth step,” she said.