Thomas Bray is getting some valuable hands-on legislative experience this school year. 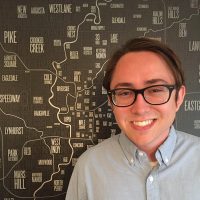 Bray, 21, is serving as the Lawrence M. Borst Fellow with the Indiana State Senate. The 2013 Fishers High School graduate is getting his master’s of public affairs in urban sustainability at IUPUI School of Public and Environmental Affairs.

“I’m learning a crash course in how state legislation works and how state government operates,” Bray said. “I’m doing issue research. If a legislator doesn’t know something or has a thought, especially if it’s something financial, they’ll come to us and ask for information. Then I come up with a fairly short memo that explains the situation they want to know about. I like it. It’s fun.”

The fellowship began in August and runs through the 2016-17 school year. Bray is working user senate fiscal analysts, David Reynolds and Krista Rivera.

The fellowship, which began in 2006, is named in honor of 38-year legislative veteran Borst and is offered yearly to an accomplished student. This fellowship consists of a 20-hour work week during the fall semester while the student is enrolled full-time in graduate school. It will be a full-time workweek during the spring semester and legislative session.

“Each year, the Borst Fellow works closely with our fiscal team here at the Statehouse,” Sen. Luke Kenley (R-Noblesville) stated in a press release. “With 2017 being a budget year, Thomas will receive extensive, hands-on experience with the state budget process, and I am confident he will make a great addition to our team.”

Bray, who graduated from University of Alabama in political science in December 2015, said he has spent a lot of time reading about the legislature operates.

“It’s been fascinating to go into a room and watch instead of just reading,” he said. “Just being present while that process has unfolding in front of me has been a really fascinating opportunity.”

The coolest part has been seeing how government works, he said.

Bray said he would be interested in working for Indianapolis’ office of sustainability.

“I think that would be a great opportunity to be in public service but not necessarily have to work on campaigns or be an elected official, at least not yet,” he said.