You are at:Home»Current in Geist»Fifth annual Gobblers Jog 5K kicks off Thanksgiving 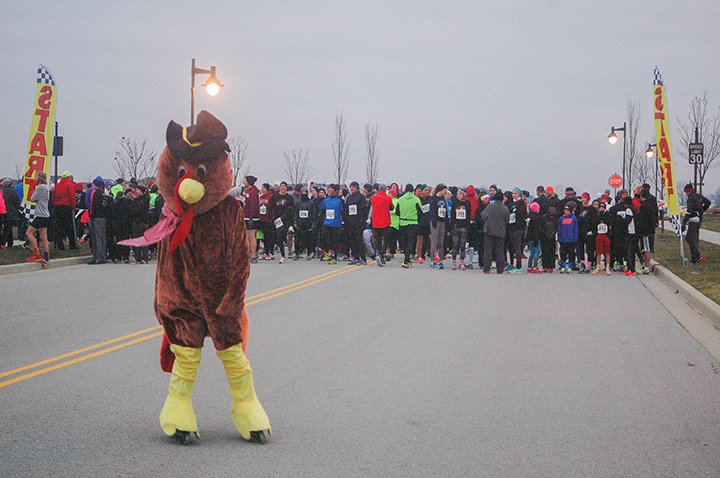 Thanksgiving is a day of turkey, stuffing, decadent desserts … and the Gobblers Jog 5K. The fifth annual race is set for 8 a.m. Nov. 24 at Witten Park in Saxony Village.

The race was started five years ago by Hamilton Southeastern High School cross country Coach Joe Golden as a way to promote health and fitness in the community beyond the schools.

“I picked Thanksgiving because my son and I had done another race in Broad Ripple, and it had gotten so big and congested, and he was so young, and I didn’t feel safe with him in that crowd,” Golden said. “I thought there were so many people from the Fishers area driving down there, and there wasn’t anything up here. And I also thought it would be a great service opportunity for my team, and it all came together then.”

Golden chose Saxony for the race because of the 5K course the development built.

“It’s a really nice course and a great layout, and it starts and finishes in Saxony, so it was a really easy decision,” Golden said.

In its first year, the Gobblers Jog had approximately 600 entrants. In 2015, there were close to 1,300. Proceeds from the race support area food banks, as well as fitness initiatives at Hamilton Southeastern schools.

“It’s a great way to start Thanksgiving Day and spend time with family and get your fitness in before Thanksgiving,” Golden said. “And to also know it has a charitable aspect to it and you are helping others.”

For more or to pre-register, visit goldeneventpromotion.com.